Chinese Activist’s Trial Postponed Amid Fears for Her Health

May 29, 2014       Comments Off on Chinese Activist’s Trial Postponed Amid Fears for Her Health 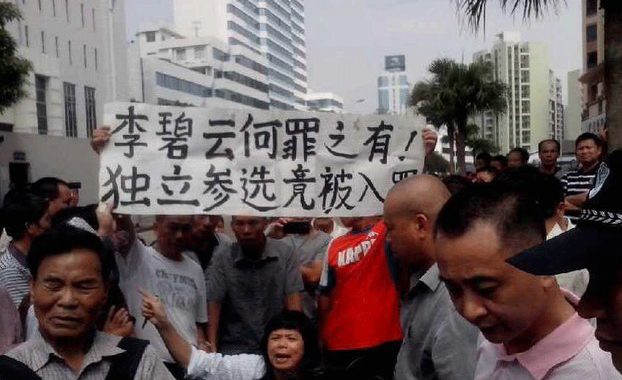 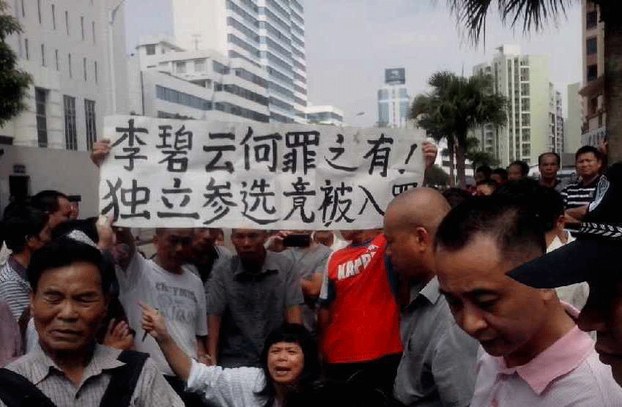 Authorities in the southern Chinese province of Guangdong on Thursday adjourned the trial of a woman who tried to stand as an independent election candidate amid growing fears for her health after extreme mistreatment in police custody, her lawyer and supporters said.More than 100 supporters arrived outside the Shunde District People’s Court in Guangdong’s Foshan city on Thursday to attend the trial of former independent election candidate Li Biyun, who was charged in September last year with violating election laws.“The trial couldn’t go ahead, because Li Biyun’s health was so poor,” Li’s friend Tian Li, who was among some 20 supporters allowed into the courtroom, told RFA.“They say that no one took care of her in hospital, that no one cleaned up her urine and feces, and that they tortured her,” he said.“She had no human rights at all.”Tian said Li had wanted to go ahead with the hearing. “Li Biyun was crying in the courtroom; she wanted to stand trial,” he said.“But her health was too frail to allow it.”Feared return to hospitalLi’s attorney, Beijing-based rights lawyer Lin Qilei, said both the prosecution and the defense had applied for the hearing to be adjourned on medical grounds.“The judge indicated finally that she was in poor health, and the trial was adjourned,” Lin said.He said Li had been anxious to continue the trial, possibly to avoid being sent back to a hospital run by the People’s Armed Police.“She isn’t being held in a detention center, but in an armed police hospital,” Lin said. “The hospital has been seriously mistreating her.”“They have refused to treat her, and they didn’t change her clothes or allow her to take a bath for several months on end,” he said.“I think she wanted to continue the trial because … she feels terror at the thought of going back to that hospital.”Fellow defense lawyer Fan Biaowen said Li had described prolonged torture at the hands of the Shunde district police department since her formal arrest in September 2012.“Li Biyun came out of the court in a wheelchair and said that officers from the Shunde police had beaten her until she had a broken spine,” Fan said.“While in the hospital, she was coughing up blood and experiencing tightness in the chest.”‘Life may be in danger’He said that Li had become agitated outside the court buildings and tried to leave her wheelchair, and that court officials had called an ambulance to help her.“They put an oxygen mask on her when they came,” he said.Guangzhou-based activist Su Changlan was also in the courtroom as a volunteer observer on behalf of the U.S.-based Women’s Rights in China group, she said.“She kept calling out to tell us that the regular police and the armed police had beaten her up, to the extent that everyone around was in tears,” Su said.“She said that she was beaten, that her spine was fractured, that she couldn’t get proper medical care,and couldn’t walk for a very long time, and that she was coughing up blood,” she added.“We hope she will be granted bail on medical grounds, so she can get the care she needs. Otherwise, her life may be in danger,” Su said.Denial of care
Rights groups have warned that the ruling Chinese Communist Party is increasingly using the denial of medical care as a way of targeting rights activists and political prisoners while they are in police custody ahead of their trial.A recent article in the New York Review of Books cited the fate of rights activist Cao Shunli, who died in hospital on March 14 after being refused the correct medical care in a Beijing detention center, her lawyer and relatives said at the time.The article, penned by China Human Rights Defenders (CHRD) spokeswoman Renee Xia and by Perry Link, Emeritus Professor of East Asian Studies at Princeton University, said detained rights lawyer Pu Zhiqiang and social science scholar Xu Youyu had also had their much-needed medication confiscated, with unfamilar pills offered in its place.“Cao’s death, and the circumstances of Pu’s and Xu’s detention, raise the question of whether Chinese authorities are deliberately withholding medicine from political detainees as another way to punish them and intimidate their followers,” Link and Xia wrote.Dozens of political activists across China joined a 2011-2012 campaign to file applications to stand for election to district-level National People’s Congress (NPC) bodies, in spite of official warnings that there is “no such thing” as an independent candidate.Activists tried to use a clause in the election rules which allows anyone with the endorsement of at least 10 constituents to seek nomination.Many of the candidates, like Li, hailed from the least privileged groups in Chinese society, including those who have been forcibly evicted from their homes or who have long campaigned for their legal rights.Apart from a token group of “democratic parties” which never oppose or criticize the ruling Chinese Communist Party, opposition political parties are banned in China, and those who set them up are frequently handed lengthy jail terms.Reported by Qiao Long for RFA’s Mandarin Service. Translated and written in English by Luisetta Mudie.