China Keeps Tiananmen Chatter Under Wraps Ahead of Anniversary

June 9, 2014       Comments Off on China Keeps Tiananmen Chatter Under Wraps Ahead of Anniversary

Originally published by The Wall Street Journal on June 2, 2014 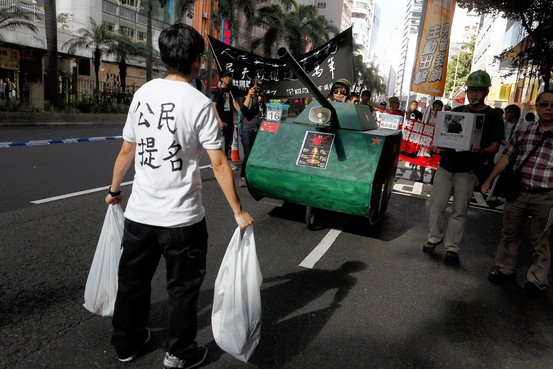 In Hong Kong, protesters recreated scenes from the Tiananmen Square crackdown. In mainland China, however, such displays were forbidden. Associated Press

BEIJING—China’s leadership is leaving little to chance ahead of this week’s 25th anniversary of the bloody quashing of the Tiananmen Square protests, having embarked on a widespread clampdown on dissent that has targeted lawyers, rights activists and journalists, among others.

Rights groups say dozens have been detained, questioned or put under house arrest to try to make sure no commemorations are held. The group Chinese Human Rights Defenders puts the number at 50 “detained, disappeared or summoned.”

The capital’s already tight security has been bolstered ahead of the June 3-4 anniversary, and following terrorist violence in other parts of the country.

More on the Tiananmen Anniversary

“They’re grabbing people everywhere,” said Liu Shihui, a rights lawyer who was detained for more than 10 days by authorities in Shanghai and sent back to his hometown in Inner Mongolia last month. Mr. Liu said this was the biggest roundup of activists in China since the sweeping crackdown launched to prevent any spillover from the Arab Spring democracy demonstrations in the Middle East in 2011.

The government rarely comments on activities linked to the Tiananmen anniversary, and has declined to comment on the detention of activists or the blocking of some media and Internet services.

Chinese authorities began broadly disrupting use of Google,from basic searches to Gmail, ahead of the anniversary, according to GreatFire.org, an organization that monitors Chinese censorship. Such disruptions of Google and other Internet services are common in China around sensitive anniversaries. A report on usage traffic that Google posted on its website shows a drop China’s use of services starting Sunday. “We’ve checked extensively and there are no technical problems on our side,” a Google spokeswoman said. 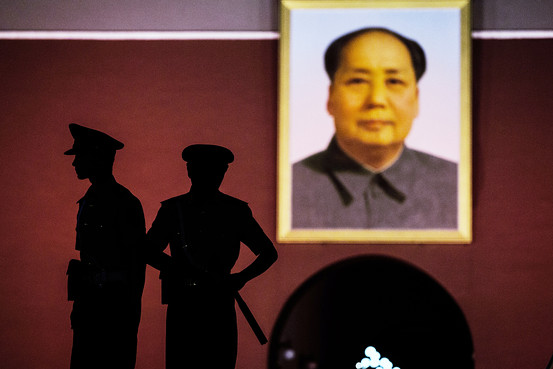 Chinese security forces stand under a portrait of the late Mao Zedong at Tiananmen Square on Monday. Getty Images

Authorities are also more readily using criminal charges to detain dissidents and activists, human-rights activists say, raising concerns they could face prison sentences rather than be released after the anniversary, as has happened in the past.

“It’s a reaction to the fact that the authorities are aware there is a volatile, tense atmosphere” in China, said Eva Pils, an expert on Chinese law and human rights at the Chinese University of Hong Kong. She said the use of criminal law was a way of more demonstratively saying dissent won’t be tolerated.

The latest crackdown on dissent, which appears to be more forceful than in recent years, fits with the overall tighter grip the Communist Party has tried to place on society, officials, the Internet and other areas since Xi Jinping ascended to the No. 1 leadership post 18 months ago.

Beijing has intensified its control over information, with foreign media coming under greater scrutiny.

The Foreign Correspondents’ Club of China, a journalism industry group based in Beijing, has criticized the government’s “increasing harassment and intimidation” ahead of the anniversary after police discouraged some reporters from covering the anniversary and warned about the consequences of disobeying the government.

Xin Jian, a Chinese national who was working for a Japanese news organization, Nihon Keizai Shimbun, has been detained by authorities in southwest China, but the news agency provided few details of the circumstances.

The Chinese-language websites of some international media, including The Wall Street Journal, have been blocked in the mainland, though authorities have given no reason. A spokeswoman for Dow Jones & Co., publisher of the Journal, confirmed the site has been blocked since Saturday, but declined to elaborate.

The Tiananmen protests, which called for democracy and other political change, ebbed and flowed in Beijing for six weeks in 1989. Party leaders saw them as a threat to their authority and ordered the military to put a stop to them. Several hundred students and others were killed, according to some estimates, as the military pushed into central Beijing on June 3 and 4.

In many ways, Beijing today differs vastly from what it was in 1989. Where bicycles once dominated the city, luxury cars now clog its roadways. Well-heeled residents dress in international designer brands and the city has become a major destination for global commerce despite a slowing Chinese economy.But the government still struggles with many of the most serious issues raised during the Tiananmen protests—among them rampant official corruption.

President Xi has promised to stamp out corruption, but has so far failed to enact political reforms that would enhance transparency and the rule of law, which are widely thought to be necessary for the campaign to be effective.

Underscoring the leadership’s intolerance of dissent was the detention last month of rights lawyer Pu Zhiqiang and four others who attended a private commemoration in Beijing of the June 4 crackdown.

Mr. Pu hasn’t been formally charged with a crime, though his detention order cites “picking quarrels.” He couldn’t be reached to comment. Rights groups and others are demanding his release.

Mr. Liu, the rights lawyer who was detained in Shanghai, said he wasn’t bothered by authorities during the 20th anniversary of the crackdown in 2009. “Now, it’s impossible to hold such activities. The controls are much tighter.”

Mr. Liu said authorities have confiscated his government identity card, making it difficult to travel, and told him they wouldn’t return it until after the June 4. “The only way the government can feel relaxed is if we’re in jail or confined to our hometowns,” he said.

—James T. Areddy and Alistair Barr contributed to this article.