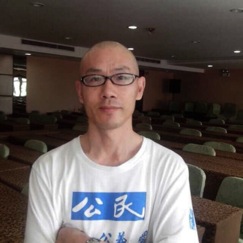 Crime: “Illegal business activity,” and “Gathering a crowd to disrupt order of a public place”

Over a dozen Zhengzhou police raided the home of prominent rights lawyer Chang Boyang (常伯阳) and took him away for questioning in late May 2014 after local authorities repeatedly denied his requests to visit his clients. Chang had demanded to see activists who were detained for organizing a memorial event earlier that year to commemorate June Fourth as well as former Chinese leaders Hu Yaobang (胡耀邦) and Zhao Ziyang (赵紫阳). Chang was charged with “gathering a crowd to disrupt order of a public place” the day after he was summoned, and the police have held him incommunicado ever since. Local police then charged him with “creating a disturbance” before he was formally arrested for “illegal business activity,” which is likely related to his role as a co-founder and legal counsel for the anti-discrimination and health rights NGO, Zhengzhou Yirenping. By mid-June, plainclothes police officers tried to pressure the NGO’s staff to cooperate with the investigation of Chang. Police inquired about the group’s ties to lawyer Chang, alleging that the lawyer has a financial interest in the group. They froze the group’s bank account and seized two computers and financial documents from the office.

Chang’s family fear he has been subjected to torture, as Chinese police routinely deny access to detainees in order to prevent family members and lawyers from disclosing their mistreatment at detention facilities. Authorities told a group of lawyers on June 7, 2014, that they were denied access to their clients because the detainees were held on suspicion of “endangering state security,” despite none of them having been charged with such a crime.

Born in 1969, Chang Boyang has actively engaged in pro-bono legal services for marginalized groups such as migrant workers, victims of HIV/AIDS, and children from low-income families. Before becoming a lawyer, Chang participated in the 1989 pro-democracy movement, opened a factory in the early 1990s, and later worked as a manager at a company. After his brief business experience, Chang decided to pursue a career in law and in 2004 he founded “Boyang Legal Aid Network,” a group of lawyers providing pro-bono legal services. Two years later, Chang established the first-ever nationwide hotline for victims of Hepatitis B. In addition, he participated in open petitions protesting corruption and seeking social justice. During the melamine baby-milk contamination scandal in 2008, Chang spearheaded a coalition of over 160 lawyers across China to provide mothers of affected children with legal assistance.