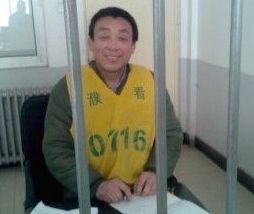 Crime: “Fraud” and “gathering a crowd to disrupt social order”

Christian pastor Zhang Shaojie, along with approximately 20 church members, was forcibly taken into custody without a warrant in November 2013. He was criminally detained the next day on suspicion of “obstructing official business” and later arrested with the additional crime of “gathering a crowd to disrupt social order.” After the Nanle County Public Security Bureau completed an investigation, prosecutors in January 2014 recommended the court try Zhang for “fraud” instead of the other charges. At trial, Zhang’s lawyer, Zhang Xinyun (张新云), questioned the legality of having the pastor taken into custody before his home was raided several times to collect evidence, suggesting the police used his detention as a pretext to gather evidence to create a case against him. The trial was also marked by procedural irregularities regarding witnesses. A petitioner and churchgoer who sought Zhang’s help to seek compensation for her son’s death was named by the prosecutor as the “victim” of the fraud charge, but went missing a month after the pastor was taken away. Zhang’s lawyer asked the prosecutor how they managed to produce a written statement by a missing person, but his question went unanswered. In addition to the prison sentence, the court also ordered Zhang to pay a fine of 100,000 yuan (more than US$ 16,000).

Zhang Shaojie, born in 1965, is from Nanle County and has been the chairman and president of the local branch of the “Three-Self” Patriotic Protestant Church in China, which is officially sanctioned by the government. He is also a member of the CCP’s “Political Consultative” body in Nanle. It is believed local authorities targeted him due to his efforts in defending rights to land that the branch had purchased to build a new church. Zhang and church members travelled to Beijing three times in November 2013, hoping central officials would help resolve the land dispute. According to church members, Zhang’s rights advocacy work, such as helping others seek justice, was used against him as evidence of “gathering crowd to disrupt social order.” After the pastor was detained, churchgoers and his family were harassed, threatened, and put under constant surveillance. Prior to his trial, Zhang’s daughter was disappeared and detained in a black jail, and she and her family received asylum in the United States soon after the proceedings.