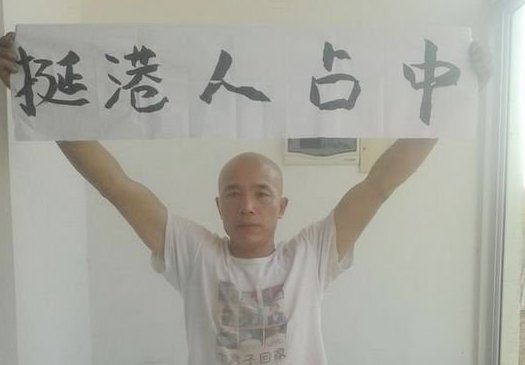 A number of Chinese citizens have faced reprisals for supporting the protests for universal suffrage in Hong Kong. The occupation of several areas in Hong Kong, including parts of its financial and political center, has inspired many Chinese on the mainland and encouraged them to speak up for democracy, with many photos appearing on social media of activists holding signs in support of Hong Kong and demanding constitutional democracy for the territory. Police in China have harassed and warned activists in many cities, concerned that they may try to travel to Hong Kong or take to streets to protest.

On September 30, Chongqing national security officers called activist Xie Dan (谢丹) to say they were coming to his home to question him. Chongqing activist Han Liang (韩良) was questioned by police in the early morning of September 30, but has since returned home. Beijing activists Han Ying (韩颖) and Guo Guijun (郭桂军) were both visited by police at their homes late at night on September 30. Police demanded entry but did not show any proper documentation and threatened to take them into custody, since the activists refused to open their doors. Their fate remains unclear at the time of this report. In addition, national security officers from Changyuan County in Henan Province threatened democracy activist Guo Chunping (郭春平) after he sent a message on WeChat, a Chinese text messaging platform, in support of Hong Kong on September 29. An officer called Guo and said he would be in danger if he didn’t answer her questions.[1] 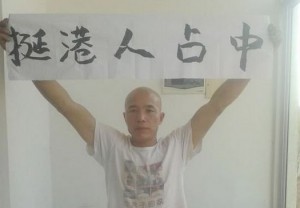 Activist Song Ningsheng (宋宁生) of Jiangxi Province was taken away by police for holding up signs in support of the Hong Kong protests. (Image: CRLW)

7th Tibetan Self-Immolates This Year in Protest Over Chinese Rule

Tibetan student Lhamo Tashi (拉莫扎西) died from his injuries after self-immolating on September 17 in Gansu Province, the seventh individual to self-immolate this year in protest over Chinese government rule in Tibetan areas, according to the Tibetan Centre for Human Rights and Democracy (TCHRD). The 32-year-old Lhamo Tashi, the first Tibetan to self-immolate since April, is now among at least 131 Tibetans who have committed this act of protest since 2011. According to TCHRD, the family requested his body be returned to them, but police refused and cremated it instead, later handing back his ashes. Lhamo Tashi was from Sangchu County in Kanlho Tibetan Autonomous Prefecture.[2]

Three rights groups in China have launched an annual award to support human rights work in honor of activist Cao Shunli (曹顺利), who died on March 14, 2014, after being denied medical treatment for five months in detention. Human Rights Campaign in China (权利运动), Civil Rights & Livelihood Watch (民生观察), and Rights Defense Network (维权网) will bestow an award to a Chinese human rights defender on March 14 each year, which has been designated by some Chinese activists as “Human Rights Defenders Day” to mark the day Cao Shunli passed away. The recipient will be awarded funding to conduct human rights initiatives, especially “to push for civil society participation in international human rights activities” and to monitor the Chinese government’s implementation of its human rights obligations. In a joint announcement, the three NGOs said that the award will “commemorate Ms. Cao Shunli, so her life’s story will inspire generations to come.”[3]

CHRD sent a letter to the International Olympic Committee (IOC) to draw attention to reports of violations of Chinese citizens’ human rights in the lead up to, and surrounding, the Nanjing Youth Olympics held on August 16-28. CHRD partially documented cases of at least 300 activists and petitioners who were subjected to restricted movements, including being locked up in “black jails” and forced to “travel,” or were interrogated by police in Nanjing and nearby cities in Jiangsu Province. As the letter states, Chinese authorities did not uphold the Fundamental Principles of the Olympic Charter, which call for the games to “promote a peaceful society concerned with the preservation of human dignity.” CHRD further called on the IOC to ensure that Beijing’s bid to host the 2022 Winter Olympics is assessed against the government’s efforts to respect the rules of fairness and justice in providing fundamental human rights protections to all its citizens.