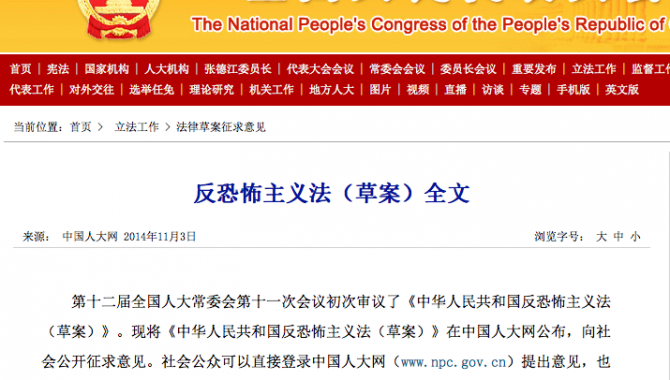 (Geneva) – Chinese authorities should withdraw or substantially revise a proposed counter-terrorism law which could be used to further monitor, censor and criminalise the work of human rights defenders and pro-democracy activists, the International Service for Human Rights and Chinese Human Rights Defenders said in a joint statement today.

‘China’s draft Anti-Terrorism Act contains a range of vague and overbroad provisions the interpretation and application of which could be used to further restrict and criminalise the work of human rights defenders,’ said ISHR Director Phil Lynch.

Article 104 of the draft law defines ‘terrorism’ in broad terms to include ‘thought, speech or behavior’ that is ‘subversive’ or even that which seeks to ‘influence national policy making’. The draft law also contains provisions which enable the designation of organisations engaged in such activities as ‘terrorist organisations’ (Articles 68-72), membership of which is a criminal offence. Additionally, the draft law prohibits ‘extremism’, defined in very broad terms to include ‘distorting or slandering national laws, policies and regulations’ or interfering with their implementation (Article 24).

‘This legislation has the potential to be interpreted and applied to criminalise much or all of the work of human rights defenders and their organisations, both in the Uighur and Tibetan Autonomous Regions and beyond,’ said Renee Xia, International Director of Chinese Human Rights Defenders.

China’s draft Anti-Terrorism Law also contains a series of concerning articles providing for large-scale monitoring and surveillance, both online and offline, together with provisions which would enable the imposition of substantial restrictions on the activities, movement and ability to associate of any ‘terror suspect’.

‘The draft law is manifestly inconsistent with the Universal Declaration of Human Rights and the Declaration on Human Rights Defenders, together with pronouncements of both the UN Security Council and the UN Human Rights Council. It should be withdrawn or substantially rewritten,’ Ms Xia said.

The UDHR protects the rights to freedom of expression, association and peaceful assembly while, among other things, the Declaration on Human Rights Defenders enshrines the rights to critique national laws and institutions (Article 8), to complain about the policies and practices of governmental officials and bodies (Article 9), and to advocate the acceptance of human rights ideas and principles (Article 7).

Security Council Resolution 1456 (2003) and Human Rights Council Resolution 22/6 (2013) both call on States to ensure that laws and policies to combat terrorism and promote national security comply with international human rights law, with the HRC resolution going further to express ‘grave concern’ at the use of counter-terrorism laws ‘to target human rights defenders’ and calling on States to ensure that ‘measures to combat terrorism…do not hinder the work and safety of individuals, groups and organs of society engaged in promoting and defending human rights’.

‘Like all States, China has the right and the duty to combat terrorism and promote national security. This draft legislation goes far beyond that legitimate purpose, however, to provide for the potential surveillance, harassment, criminalisation and imprisonment of human rights defenders, journalists, lawyers and other civil society actors peacefully exercising their rights to freedom of expression, association and assembly,’ said Mr Lynch.

‘Human rights defenders, pro-democracy activists, dissidents, and those who work to oppose oppressive practices or expose corruption may challenge State power, but that should not make them enemies of the State. Indeed, such work is crucial to development, good governance and the rule of law,’ Mr Lynch said.

ISHR and CHRD call on the Chinese government to withdraw or substantially rewrite the draft legislation, ensuring that all laws and policies to counter-terrorism and promote national security are compatible with international human rights laws and standards.