The Plight of China’s Rights Lawyers 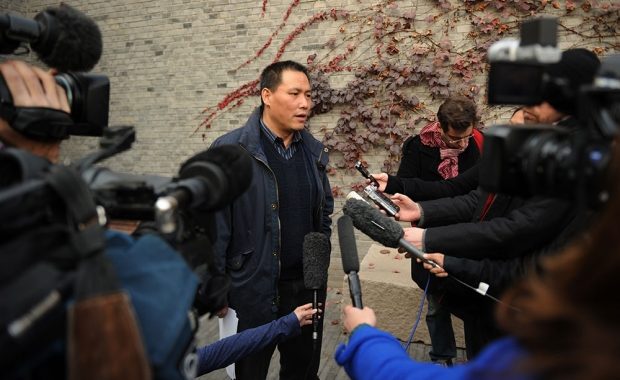 Originally published on ChinaFile on January 16, 2015

As the year came to a close, at least seven prominent Chinese human rights lawyers rang in the New Year from a jail cell. Under President Xi Jinping, 2014 was one of the worst years in recent memory for China’s embattled civil society. Bookending the year were the cases of two prominent legal advocates: in January, Xu Zhiyong was sentenced to four years imprisonment for his moderate criticism of government policy and leading the “New Citizens’ Movement,” a group advocating for political reforms in China. Outspoken free speech lawyer Pu Zhiqiang, who turns 50 tomorrow, has spent the past six months in detention as authorities continue to build a case against him.

The past year has been distinctly bad for a band of crusading lawyers, who for the past decade or so, since their movement first emerged, have described their mission as weiquan, “safeguarding rights.” According to several Chinese rights lawyers, more members of their ranks—which have grown from just a handful to over 200—are currently in detention than at any time since 2003, when lawyers involved in this kind of work first began to face criminal detention.

Among the first to be arrested was Gao Zhisheng, a feisty and outspoken defender of everyone, from factory workers and peasants to journalists and underground Christian and Falun Gong practitioners, who was sentenced to three years in 2006 on the politically motived charge of “inciting subversion of state power.” Suspending his sentence, authorities instead held Gao several times in detention incommunicado—where he was brutally tortured—until 2011, when judges ordered Gao to be sent to prison for “violating” his parole. Gao, who was released into a form of house arrest in August 2014, was a prominent case, yet imprisoning lawyers was still unusual at the time. Since then, rights lawyers who have taken on cases involving politically “sensitive” issues have increasingly faced threats, harassment, administrative punishments, the revocation of their law licenses, and, as in a few widely publicized cases, disappearance and even torture.

But since President Xi Jinping came to power, the government’s war on rights lawyers has escalated. At least nine prominent lawyers either are currently facing criminal charges or began serving prison sentences in 2014: lawyers Ding Jiaxi, Pu Zhiqiang, Qu Zhenhong, Tang Jingling, Xia Lin, Xu Zhiyong, and Yu Wensheng, as well as Chang Boyang and Ji Laisong who were both released on bail awaiting trial after months in detention. The unprecedented scale of criminal prosecution against rights lawyers sharply contradicts the goal of “governing the country by law,” which was proclaimed at October’s Fourth Plenum meeting, a gathering of senior Chinese Communist Party leaders.

A student leader in the 1989 pro-democracy movement, Pu Zhiqing had gone on to represent several high profile free-speech cases, including an anti-defamation ruling in favor of the magazine China Reform in 2004 and a much heralded defence of the authors of a widely read exposé of rural corruption. More recently, he defended activist artist Ai Weiwei and petitioner Tang Hui—who was sent to a re-education through labor (RTL) camp for petitioning for stronger punishment for her daughter’s rapists—in a case which garnered widespread public sympathy. State media even featured Pu in reports on RTL, an unusual platform for a government critic. But now Pu has been detained on charges of “creating a disturbance” and “illegally obtaining personal information” after attending a seminar in May discussing the June Fourth Massacre. Police later tacked on additional charges of “inciting ethnic hatred” and “inciting separatism,” reportedly over a blog post Pu had written criticising the government’s version of the Kunming knife attack in March 2014. Lawyer Qu Zhenhong, who initially served as Pu’s lawyer, was arrested in June in connection with his case.

Tang Jingling, arrested after taking part in a commemorative “June Fourth Meditation” last summer, was a lawyer who defended victims of government land grabs, counterfeit medicine, and village corruption until authorities refused to renew his law license in 2006. He then became a “citizen representative,” continuing to give legal assistance, and later a member of a non-violent civil disobedience movement that works on labor rights, the hukou system, and equal education. At the end of the year, Guangzhou police transferred Tang’s case to the local prosecutor, an indication that he may be indicted and tried soon. If convicted, Tang faces a lengthy prison sentence for “inciting subversion of state power.” Meanwhile, his wife has faced harassment for speaking out on his case.

In November, authorities arrested two lawyers, Yu Wensheng and Xia Lin, after they were hired by families to represent activists detained for expressing support for the protests in Hong Kong. Yu faces a charge of “creating a disturbance” and Xia, a former member of Pu Zhiqiang’s legal team and partner at Pu’s Huayi Law Firm, is accused of committing fraud. Those imprisoned last year include the lawyer Ding Jiaxi, who is serving a 42-month sentence after demanding government transparency and anti-corruption measures with the New Citizens’ Movement, alongside Xu Zhiyong, whose advocacy and election to his district’s People’s Congress made him another former darling of the Chinese press. Xu missed the birth of his daughter while he awaited his January trial.

While incarcerated, these lawyers have all been granted only limited access to their attorneys. The PRC Law on Lawyers (2007) authorizes lawyers to meet with their clients starting on the very day when they are put under detention, as does China’s Criminal Procedure Law. But, according to lawyers and family members of detainees, such provisions are rarely respected on the ground and often overridden by local administrative or Party orders, especially in political cases.

Family members of the jailed lawyers have reason to fear, since rights lawyers are no strangers to torture in detention and police brutality. Tang Jingling told his lawyer he was assaulted at Guangzhou No. 1 Detention Center, and in an open letter to Xi Jinping Pu Zhiqiang’s wife decried the “inhumane mental and physical torment” her husband has been subjected to at the Beijing No. 1 Detention Center. In Heilongjiang province in March, four lawyers were taken into custody and severely beaten after they requested to meet with their clients; according to their family members, the four suffered 24 broken ribs among them. Gao Zhisheng suffered such ill-treatment in prison that he lost almost all his teeth and remains very frail.

China’s leaders are far from governing the country under a system based on the rule of law. Instead, they are paying lip service to the idea in order to give legitimacy to the Communist Party’s rule while building a legal system that serves their political interests. This includes manipulating the criminal justice system to silence dissent and rein in human rights lawyers who push for judicial independence, fair trials, and protection of their clients’ legal rights. Chinese law bars a convicted lawyer from practising law for good. This is at the heart of what makes the currently growing trend of criminalizing rights lawyers particularly troubling.

Allowing lawyers and the judiciary to carry out their work without political interference is a key indicator of a country’s success in promoting rule of law. In November, China’s nominal legislative body, the National People’s Congress, posted online for “public consultation” several amendments to the country’s Criminal Code. Among these draft amendments is Article 35, which would revise the Criminal Law on the disruption of court proceedings by giving authorities overly broad powers to interpret speech in court as insulting, threatening, or disruptive and includes the vague provision prohibiting “anything else that seriously disrupts court proceedings.” The effect of these changes would be to criminalize lawyers’ speech during trials if they challenge the court, punishable by up to three years in prison. More than 500 rights lawyers across China have signed an open letter to the NPC, demanding they drop this amendment as it runs “counter to the direction of judicial reform.”

China’s embattled rights lawyers, however, have refused to be coerced into submission. On the contrary, they are increasingly challenging authorities for failing to practice the respect for the law that they preach. More young lawyers are joining the movement. Trained professionals, they strongly believe that all suspects should be afforded a fair and public trial, and they see no reason why ruling élites should be above the law. Many are paying a heavy price, but see it as a part of the struggle for a “better future.” Facing the charges against him, Pu Zhiqiang is fully aware of what awaits him. As he said to his lawyer from jail: “If we lose, I probably can’t be a lawyer after I get out, so what can I be?”