Originally published by Telegraph on April 17

A veteran Chinese journalist has been sentenced to seven years in prison for “leaking state secrets” in what activists described as the latest chapter in an unyielding Communist Party offensive against its opponents.

Gao Yu, a 71-year-old writer who has spent decades chronicling Chinese politics, was arrested in April last year and faced trial in November.

On Friday morning the Beijing-based writer was given a seven year sentence during a brief hearing at the city’s Number Three Intermediate Court.

Ms Gao was also stripped of her political rights for one year, according to a post on the court’s official Weibo account.

The charges relate to a sensitive Communist Party document that the journalist was accused of sending to an overseas news website.

After the verdict was handed down Ms Gao’s brother took to his feet and said: “Take care, my sister”.

Ms Gao then turned to face her relation, according to Shang Baojun, one of her lawyers. “I will appeal,” she said.

News of the sentencing was greeted with a tsunami of criticism directed at the Communist Party.

William Nee, Amnesty International’s China researcher, described the verdict as “an affront to justice and an attack on freedom of expression”.

“This deplorable sentence against Gao Yu is nothing more than blatant political persecution by the Chinese authorities,” he said.

“It is shocking news,” said Renee Xia, the International Director of the Network of Chinese Human Rights Defenders “She shouldn’t have been detained in the first place for exercising freedom of information.” 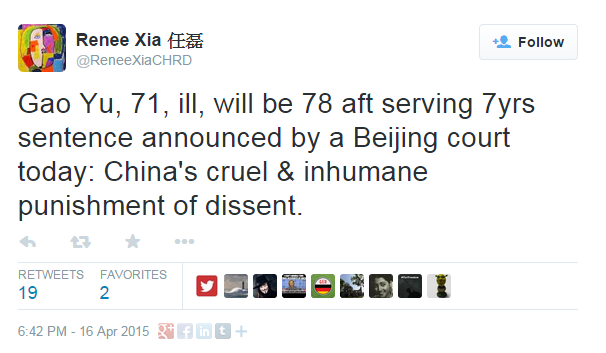 Ms Xia urged the international community to confront China over the journalist’s imprisonment as it did over the recent detention of five female activists who were released on bail this week following a global outcry.

“I think the world should speak up,” she said.

Ms Gao was arrested on April 24 2014 in the lead up to the 25th anniversary of the military crackdown on protestors in Tiananmen Square. The following month she was paraded on Chinese television and forced to make a “confession” of her alleged crimes.

“The political decision [to jail Ms Gao] was taken way back when she was arrested and forced to produce this fake confession on TV,” said Nicholas Bequelin, Amnesty International’s Regional Director for East Asia.

“She was clearly part of a larger drive by Xi Jinping and his team to tighten the control of the party workings and party information. The judicial process itself mattered little.”

Ms Gao, who is said to suffer from health problems including high blood pressure and heart complaints, was tried in November for allegedly “leaking state secrets overseas”.

The charges are understood to relate to an internal Communist Party paper known as “Document Number 9”. The document identifies seven key threats to the party’s existence including western-style democracy, human rights and a free press.

Speaking ahead of Friday’s sentencing, Bao Tong, a former top Communist Party official, said Ms Gao had done nothing more than fulfil“the sacred duty of a journalist” by informing her readers of the document.

“Not one word of what she wrote was a lie,” said Mr Bao, who served under Zhao Ziyang, the Communist Party’s former general secretary and has since become an outspoken government critic.

Communist Party leaders would have felt “embarrassed” by the document’s distribution overseas even though its contents were no kind of secret within China itself, Mr Bequelin said.

“There was nothing secret in the document but it laid bare how hostile the party is to many values and ideals that are now commonly shared among citizens: an independent judiciary, press freedom, greater freedom of information.”

When Xi Jinping took over as the Communist Party’s chief in November 2012 there were hopes he might prove to be a reformer who would lead China into an era of greater political openness. Just over two years later, those hopes have been dashed, amid an unflinching clampdown government critics such as Ms Gao.

Before her arrest, Ms Gao had written about Xi Jinping, a man who is now widely described as China’s most powerful and authoritarian leader since Chairman Mao.

China’s leader wanted to restore “the kind of authority and legitimacy Mao Zedong enjoyed at the beginning of communist China,” she wrote in one essay.