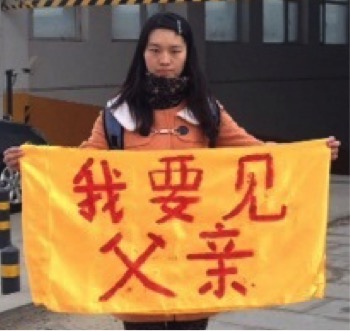 Crime: Using a cult to undermine implementation of law

More than a dozen police officers and national security officers raided Bian Xiaohui’s residence on March 12, 2014 after she repeatedly demanded to see her imprisoned father. They forcefully seized her without a warrant and put her under criminal detention the next day. Bian had protested with a banner—on March 4, 7, and 12—outside Shijiazhuang Prison, where her father is incarcerated, that said, “I want to see my father.” When passersby asked about her situation, she told them she has not been allowed to see her father for a couple of months and that she worried about his condition in prison. During the last visit with her father in prison, he informed her of mistreatment he had suffered, including deprivation of proper medical treatment for heart disease and repeated and prolonged interrogation.

After nearly two months of detention incommunicado, Bian was first allowed a visit from her lawyers in early May 2014. Bian told them the violations she had suffered, including torture and other forms of mistreatment. According to Bian, guards forced her to sleep on the floor for 25 days, from March 19 to April 14, 2014. She was given laundry detergent to wash her hair and forced to use freezing cold water to wash her body. Authorities denied her visits from her lawyers because she refused to wear the prison uniform and shackles. Prison authorities also force-fed Bian after she staged a hunger strike for a week in protest against her deprived right to legal counsel, despite the fact that she had expressed a willingness to eat.

A number of legal and procedural violations occurred throughout Bian Xiaohui’s trial, as local authorities obstructed her right to a fair and open trial. Her first trial was held at the Qiaodong District People’s Court in Shijiazhuang, but authorities prevented family members and supporters from attending. Bian’s lawyers left the trial in protest and the hearing was resumed on December 12 without any notice to her family or attorneys, except for lawyer Jiang Yuanmin (蒋援民). Her lawyers filed an appeal after the guilty verdict; however, they suspected a second hearing had taken place behind closed doors on June 12, 2015. The presiding judge ignored repeated efforts by her lawyers to seek clarification. Bian was released in September 2017, having completed her prison sentence.

Born in 1990, Bian is a recent graduate of Jilin University of Finance and Economics in Jilin Province and had started working with an NGO in Beijing. Bian’s father, Bian Lichao, a middle school teacher, has been serving a 12-year sentence in Shijiazhuang Prison since 2012 in retaliation for practicing Falun Gong, a spiritual meditation practice outlawed by the Chinese government. The denial of Bian Lichao’s visits with his daughter constitute a violation of Chinese law, which guarantee prisoners at least one family visit a month. When Bian Xiaohui was taken away, her aunt, Chen Yinghua (陈英华) was also detained and sentenced to four years for photographing Bian holding the banner and sharing it on the Internet. Bian’s mother, Zhou Xiuzhen (周秀珍), also a teacher, has been in detention since the day after Bian was taken away. Hebei police seized Zhou to end her efforts to generate support to push for her daughter’s release. According to colleagues at the NGO, Bian Xiaohui has “a bright and cheerful disposition as well as great passion for life.”