China: Bringing Down The House 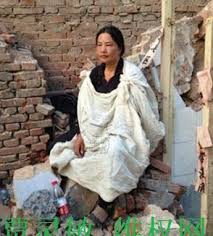 In response to discontent over high housing costs, China’s central government has made the construction of more affordable urban housing an official goal. But clearing land in a city to build new homes has a human cost. To make way for high-rise apartments, countless city dwellers have been forced from their homes, have not received adequate compensation, and are now homeless. In China and elsewhere, creating affordable housing should not come at the expense of human rights.

There are corrupt partnerships in China between local government officials and private developers. With the state as the de facto owner of land, officials have sold off permits to the private sector and ordered the demolition of city blocks. In 2010, central authorities for the first time made low-cost housing construction part of the performance evaluations of local officials. To help meet these housing targets, officials with an eye on their own political careers have often found it convenient to forcibly evict residents and punish victims who seek remuneration.

Regulations from 2011, which were ostensibly meant to ameliorate problems of forced demolitions, have also allowed local governments to decide how land is used under the pretext of providing for “the public good.” The provisions have been a green light for officials to undertake development plans as they see fit. Though the Chinese government has claimed that forced evictions and demolitions are on the wane, the U.N. Committee on Economic, Social, and Cultural Rights expressed regret in 2014 that China had not eliminated such incidents.

One civil society response to the scourge of illegal home demolitions has been the ascent of housing rights advocacy. Perhaps no one has embodied this work more than activist Jia Lingmin, herself a victim of a home demolition in Zhengzhou, a rapidly transforming city in Henan province. While seeking justice for her own loss, Jia has also taught other evictees to fight for their rights. Her courageous toil has been fraught with peril; Jia is now serving a 4-year prison sentence for “picking quarrels and provoking troubles,” a common charge against Chinese activists who seek accountability when citizens’ rights are violated. That housing activists face such persecution underscores how vital it is for affordable housing plans in China to attend to citizen rights.

The Chinese Communist Party has made affordable housing a talking point in its propaganda, laying out a vision of a so-called “comfortable society” by 2020. In the party’s view, this will entail protecting the “basic housing rights of all people.” While this sounds good in slogans, it is far from reality. For affordable urban housing initiatives in China, success cannot only be measured by the number of residences. The government needs to take into account how citizens are protected in development schemes that have been tainted by the self-serving interests of public and private entities. Safeguards should include the right to pursue justice when housing rights are violated, and citizens should be able to do so without the threat of state retaliation.