CHRD Releases “They Target My Human Rights Work as a Crime”: Annual Report on the Situation of Human Rights Defenders in China (2016)

February 16, 2017       Comments Off on CHRD Releases “They Target My Human Rights Work as a Crime”: Annual Report on the Situation of Human Rights Defenders in China (2016) 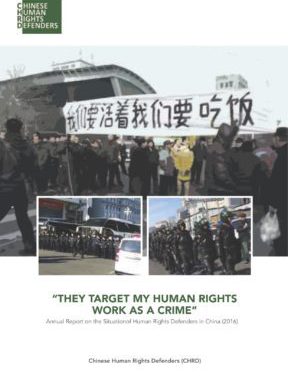 In 2016, many human rights activists and lawyers suffered reprisals. The Chinese government punished them with arbitrary detention, imprisonment, enforced disappearance, and torture. In addition, their families faced collective punishment. Police systematically deprived detained HRDs of due process rights, such as the right to a fair trial and access to independent legal counsel. Authorities also rolled out a series of draconian laws and regulations that give police even more power to criminalize human rights activities.

The report finds an alarming trend in 2016, where authorities prosecuted detained and imprisoned HRDs in larger numbers for “political” offenses. According to CHRD’s documentation, almost one-third of human rights defenders convicted in clampdowns since 2013, when Xi came to power, were charged with “endangering state security” crimes such as “subversion of state power” or “inciting subversion.” These political crimes were used in most of the cases involving prominent human rights lawyers and activists in 2016.

Stiffened controls in three particular areas of civil liberties especially affected the environment in which HRDs conduct their work—the rights to freedom of expression, peaceful assembly, and association. These rights are key to the effective monitoring of and advocacy for a wide range of human rights, such as labor rights, women’s rights, land/housing rights, health rights, or rights to clean water and air.

In terms of free and peaceful assembly, authorities continued to ban or investigate public—and sometimes even private—gatherings as “criminal activities,” claiming that they “disrupt public order” or “endanger national security.” In 2016, the government detained or imprisoned a number of HRDs for their roles in demonstrations, accusing them of “illegal assembly” or “inciting subversion.” Police continued to categorically deny applications for permission to hold demonstrations. Unable to obtain such permission, some rights defenders resorted to meeting in restaurants or private homes, which were often blocked or raided by police and led to the detention of organizers and participants.

In the area of freedom of association, the government adopted a number of draconian measures to limit the development of civil society groups. These measures have had a chilling effect on Chinese groups, especially those advocating for human rights. The government issued the Law on the Management of Overseas NGO Activities in Mainland China, signaling its intent to expand already strict control over independent organizations, including their funding sources, staffing, and activities. This law allows authorities to take very intrusive steps to monitor and even play a role in the operations of overseas NGOs working in China, and to cut off overseas funding for China’s already seriously threatened rights NGOs. Police interrogated or accused detained HRDs with ties to rights NGOs over their funding sources. Several NGOs that had been shut down or investigated before, including groups advocating health rights, women’s rights, and LGBT rights, remained either closed or operating on a drastically reduced scale. Advocacy groups continue to face accusations that their work “endangers national security.”

For China to live up to its public pledges to protect human rights and to uphold the Chinese Constitution, the Xi Jinping government must immediately stop criminalizing the activities of human rights defenders, including lawyers. Furthermore, CHRD calls on the government to release detained or imprisoned HRDs; ensure prompt and impartial investigations of allegations of torture and prosecute suspected perpetrators, holding them legally accountable; guarantee detainees’ prompt access to legal counsel; stop harassing and obstructing human rights defenders from participating in UN human rights activities, and end reprisals against them; repeal draconian stipulations in national legislation that abridge the rights to freedom of expression, peaceful assembly, and association; and allow national and international NGOs to play a full and active role in promoting and protecting human rights in China.

Authorities in Xi’an deprived citizens of their free assembly and expression rights in putting down an October protest against a proposed waste incinerator plant.

Download the full report:“They Target My Human Rights Work As a Crime,” the Annual Report on the Situation of Human Rights Defenders in China (2016)