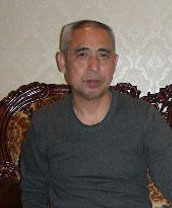 Hada, a Mongolian scholar and activist, served a 15-year prison sentence for “separatism” and “espionage” that ended on December 10, 2010. However, after his release from prison, authorities continued to detain him in an illegal “black jail” until December 9, 2014. Authorities also punished his wife Xinna (新娜) and son Uiles (威勒斯) on trumped-up charges of “illegal business activity” and “illegal drug possession,” respectively. After 16 months in detention, Xinna was sentenced to 3 years in prison in 2012 but released days later. Both she and Uiles were put under “residential surveillance.”

Hada has heart disease, a serious stomach ulcer, rheumatoid arthritis, cholecystitis, and depression. He suffered years of torture and mistreatment while in Chifeng Prison in Inner Mongolia, and was denied proper medical care. While illegally detained in Hohhot from 2010-2014, his family reported that guards exploited his loneliness and depression, and it is unclear if he received adequate medical treatment for his other conditions. In March 2014, his wife Xinna described him as being in “poor health.” He is being held in a single room and his depression has reportedly worsened. Xinna also reported that the guards have been giving him large quantities of alcohol, apparently in an attempt to cause further mental instability. This situation was first reported in January 2012 after a visit by his mother-in-law. Hada’s uncle Haschuluu reported after a brief visit in April 2012 that Hada had an unknown kidney condition, which was causing frequent urination. It was reported in October 2012 that Hada’s depression was very severe, with a doctor suggesting he be transferred to a psychiatric hospital, but authorities did not allow it. Upon his release in December 2014, Hada and Xinna gave a series of interviews to the Southern Mongolian Human Rights Information Center, in which he said he has been “disabled as a result of torture and brutality.”

While in Chifeng Prison from 1996-2010, Hada was subjected to a wide range of mistreatment and torture; he was held in solitary confinement, handcuffed overnight to a metal board with shackles, prohibited from talking to others, given only limited contact with his family, forced to work over 10 hours of hard labor every day, beaten by other inmates on orders from prison guards, and forced to eat inedible food, causing him to vomit frequently.

Xinna also suffers from a heart condition. When she was arrested in 2010, she reported her condition worsened and authorities denied her a visit to a doctor, but gave her medication that she could not identify. After she was released in 2012, she was finally allowed to see a doctor. She still has chest pains and takes medication.

Clinton: A Letter from the Wife of an Imprisoned Inner Mongolian, June 1998, Human Rights Watch