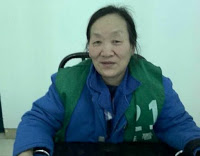 Wang Shurong of Sichuan Province had been volunteering for several years as a citizen journalist with the website 64 Tianwang Human Rights Center (六四天网) when she was detained in February 2016. At times before her incarceration, Wang had been beaten and harassed by police and hired thugs in retaliation for her work with the website. She had also advocated for the release of incarcerated activists, been a frequent petitioner, and helped other citizens use the petitioning system to seek justice for personal grievances. Wang’s detention and harsh six-year sentence have been part of a crackdown on 64 Tianwang and other groups that report on human rights issues in China. The website’s founder, Huang Qi (黄琦), was detained in November 2016, and another 64 Tianwang reporter, Wang Jing (王晶), was sent to prison in April 2016 for exposing rights abuses. Others who had worked with the site were detained in 2017.

Wang Shurong was initially seized in Beijing on February 8, 2016, where she had gone to petition. Wang tried to defend herself when interceptors beat her and other petitioners; she supposedly threatened and yelled at the driver to stop the vehicle as she was forcibly being taken back to Sichuan. For this alleged behavior, police accused her of “interfering with official business.” Once returned to Ya’an City, Wang served a 10-day administrative punishment and was then criminally detained on suspicion of “picking quarrels and provoking trouble.” Wang was additionally charged with “using dangerous methods to undermine public security” when she was arrested in March 2016.

Wang was tried and sentenced to six years in prison in April 2017, a decision upheld at an appellate trial that July. At both Wang’s first- and second-instance hearings, police blocked off the entrance to the courthouse, and authorities refused to allow Wang’s supporters to observe the proceedings. Wang has been represented by Guangdong-based rights lawyer Lin Qilei (蔺其磊). Lin said that authorities obstructed his defense by preventing him from meeting with Wang’s family members, supposedly since he was a “non-local” attorney.

Born on November 25, 1950, Wang’s drive for seeking justice traces its roots back decades. From the mid-1970s, Wang petitioned to get a divorce from her husband, who was married to multiple women at the same time, but a court delayed issuing a decision. In 1984, Wang, desperate to have her marriage dissolved, accidentally harmed her child, and the court sentenced her to 15 years’ imprisonment for “intentional injury.” She was freed in July 1999, after completing the full sentence, and then continued to seek a divorce. Both before and after that prison term, Wang had pursued the return of her family’s ancestral land and tried to clear the names of her grandfather and father, both of whom had been executed by firing squad in 1951 after the Communist government branded them “counterrevolutionaries.” The men had served as officers with the Nationalist Army, and her grandfather had been honored by the US government for helping save the lives of American soldiers whose plane crashed in China during World War II.