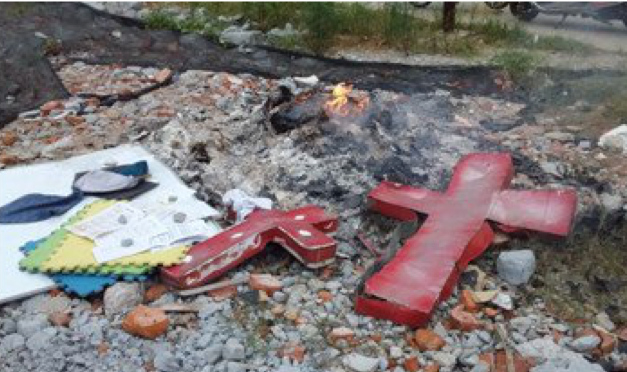 Protestors against government mishandling of scandals over faulty vaccines faced swift police response after trying to demonstrate on Tiananmen Square during the China-Africa Summit on September 3-4. Police detained, disappeared, put under house arrest many individuals. The protestors were made up victims of faulty vaccinations, which were believed to have caused permanent health damage, as well as their parents and supporters. They had travelled to the capital to draw attention to the problems and urge national legislators to tighten regulations making vaccines safer. China has been hit by several scandals involving vaccines, and while Xi Jinping and top leaders have promised to punish those responsible, police continue to detain and intimidate victims and their family members who demand compensation.

We have confirmed the following individuals’ detentions:

One person disappeared and likely in police custody:

Guangdong police continue to hold 14 individuals in a crackdown against labor rights advocacy, including striking workers at a Jasic Technology factory in Shenzhen and students who travelled there to support them. The strike started in July after workers at Jasic were dismissed and beaten by thugs for trying to unionize. Many university students from other cities had joined the laborers to show support. Police detained dozens of workers on July 27 and then raided an apartment in late August where student activists had been staying.

Following the August raid, state media attempted to portray the strike as orchestrated from an “illegal” NGO receiving overseas funding from a Hong Kong organisation. Police detained two staff members of the NGO Shenzhen Dagongzhe Migrant Workers Center (DGZ) (深圳打工者中心), Huang Qingnan (黄庆南) and Fu Changguo (付常国). Police released Huang, the organization’s legal representative, on bail on September 5, but Fu remains detained. The NGO had previously faced suppression from police for advocating for labor rights and assisting migrant workers, including a serious assault against Huang. For years, the NGO has been blocked from successfully registering as a social organization. Hong Kong-based group Worker Empowerment (WE) confirmed in a statement that it has collaborated with DGZ but not provided support to Jasic workers related to the strike.

Most of the student supporters had travelled to Shenzhen from universities, including Beijing University, Renmin University, and Beijing Language and Culture University. They have been either forcibly escorted home or put under house arrest or residential surveillance by police. They still may face reprisals from their academic institutions.

We confirmed the following 14 individuals remain in custody:

On July 27, Pingshan District, Shenzhen police detained the four former Jasic employees outside the factory and then formally arrested them on September 3 on “picking quarrels and provoking trouble” charges:

In August, police detained 10 individuals, including workers, activists, and students:

Authorities in several cities across China have stepped up pressure to shut down Christian house churches, in line with restrictive amendments to the Religious Affairs Regulations in effect since February. The amended rules include new constraints on the construction, renovation, and use of religious activity sites, such as churches, temples and mosques.

On September 5, dozens of uniformed police officers and government officials raided and damaged four separate house churches across Henan Province in coordinated operations. Authorities forcibly removed crosses and seized materials, including Bibles, and then burned them. Police dragged away church members who tried to protect the church property. On September 4, Wei Jindang (魏金党) and Yang Liupei (杨留培), two men who had posted criticism of the raids online the day before, received administrative detentions of seven and 13 days, respectively, on charges of “picking quarrels and provoking trouble.” The churches that were raided and damaged are Guangcai Church in Nanyang City, Jinglou Church in Tanghe County, Hui Xiaoying Church in Tongzhai Village in Nanyang City, and Qiupo Church in Dongwang Village in Nanyang.

In Beijing, Chaoyang District government officials forced Beijing Zion Church to shut down on September 9, on the grounds that it had not legally registered. The church, with a congregation of roughly 1,500 members, was reportedly Beijing’s largest independent Christian church. Authorities began targeting the church in June 2018, initially ordering its leaders to install surveillance equipment on “fire safety” grounds. After church heads refused, authorities began to issue threats and withdrew the business licenses for the church’s bookstore and café in August before shutting the church down in September.

In Sichuan Province, officials from the religious affairs bureau in Jinniu District broke up a service by the Chengdu Early Rain Covenant Church on September 16 and detained pastors Cao Qing’en (曹庆恩) and He Xuedong (何雪冬). Cao and He were released after a few hours.