CHRD releases “Defending Rights in a ‘No Rights Zone'”: Annual Report on the Situation of Human Rights Defenders in China (2018)

February 21, 2019       Comments Off on CHRD releases “Defending Rights in a ‘No Rights Zone'”: Annual Report on the Situation of Human Rights Defenders in China (2018) 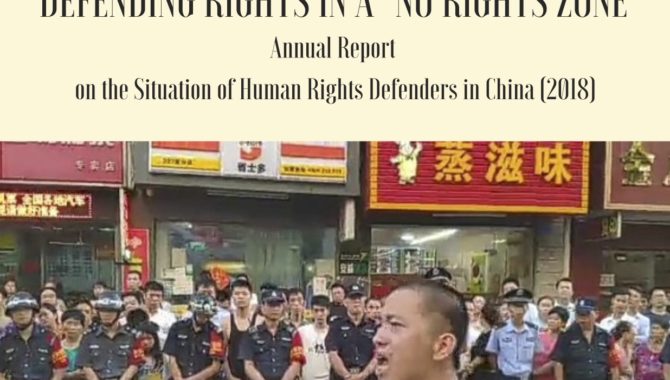 In 2018, the Chinese government under Xi Jinping escalated its brutal suppression of rights activists, lawyers, critics of authoritarian rule, repressed religious communities, and ethnic minorities, especially in the Tibetan and Uyghur regions. Xi Jinping, the President of China and the Chinese Communist Party (CCP) General Secretary, continued to hold all the power in his own hands and tightened CCP control over the government, the legislation, the judiciary, the press, religious practices, academia, and other sectors of society.

Under Xi, China’s authoritarian one-party political system has become the most draconian and invasive since the 1980s. The system denies Chinese citizens their human rights to democratic participation, freedom of expression, association, peaceful assembly, and freedom of religion, and it punishes them for promoting and exercising these rights. In 2018, authorities continued to block citizens’ efforts to voice their grievances, including criticizing the government’s failure to protect economic, social and cultural rights, or to seek redress for those grievances.

In international forums, including at the United Nations (UN), the Chinese government has aggressively promoted “human rights with Chinese characteristics,” which emphasizes development without protections for universal human rights and freedoms, as a model for other countries and the global system. As a member on the UN Security Council and Human Rights Council, the Chinese government acted defiantly, contrary to its obligation to uphold universal human rights, and instead intensified its attack on principles enshrined in the Universal Declaration of Human Rights and in the human rights treaties that China signed or ratified.

The Chinese government fought fiercely to deny reports of internment camps in the Xinjiang Uyghur Autonomous Region and rejected critical recommendations by the UN Committee on the Elimination of Racial Discrimination (CERD), which reviewed China’s compliance in August, and by other state parties during the Universal Periodic Review in November. The government continued to enjoy impunity for its violations of practically every article in the UN General Assembly’s Declaration on Human Rights Defenders.

2018 was another year of harsh reprisals against human rights defenders (HRDs) by Chinese authorities for their peaceful exercise of and advocacy for human rights. Types of retaliation included the use of torture, enforced disappearance, and arbitrary detention. The government threatened and blocked defenders from attending human rights trainings and persecuted them for having cooperated or seeking to cooperate with UN human rights experts.

Despite the tremendous obstacles and risks, human rights defenders in China carried on their efforts to amplify the voices of victims from marginalized and persecuted communities, document violations, endeavour to hold the perpetrators accountable, provide assistance, and advocate for policy or systemic reforms. HRDs demonstrated remarkable resilience, resourcefulness, and strength in taking actions to disclose government failures to protect labor, education, housing, health, food safety and environment rights, and expose authorities’ brutal suppression of rights defenders, faith communities, and ethnic minorities. These defenders bore the blunt of government retaliation.

CHRD urges the Chinese government to respect human rights and fundamental freedoms and end its repression of civil society, including HRDs. The government must release all detained and imprisoned human rights defenders including rights lawyers; investigate allegations of torture and hold torturers criminally responsible; provide detainees and prisoners prompt access to proper medical treatment; repeal “residential surveillance at a designated location” (RSDL) and end the practice of enforced disappearance; stop reprisals against HRDs for cooperating with UN human rights operations; protect the rights to freedom of expression, assembly, association, and religious freedom; and end mass arbitrary detention of ethnic Uyghurs and other Turkic Muslims.