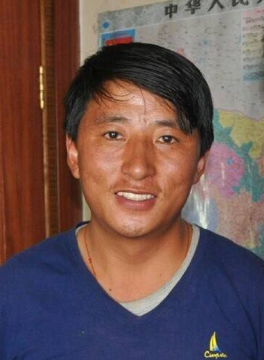 Tashi Wangchuk, an ethnic Tibetan merchant and activist, was handed a 5-year prison sentence in May 2018 in retaliation for his efforts to promote the right of Tibetans to study their heritage language. He was initially seized in January 2016, two months after an article and video came out in the New York Times on his attempt to petition the government for not providing sufficient opportunity for Tibetan language study. Tashi Wangchuk was secretly held for nearly two months after being taken into custody. His relatives were not told of his detention until March 24, 2016, in violation of Chinese law, under which adetainee’s family must be notified within 24 hours.

Early in his detention, Tashi Wangchuk was reportedly tortured and suffered other degrading treatment. He was restrained for a lengthy period in a “tiger chair,” faced intense police interrogation, and was beaten by police officers. Interrogators also threatened to harm his family. He has been granted only limited contact with his defense lawyers, Liang Xiaojun (梁小军) and Lin Qilei (蔺其磊), or with his family members, as authorities have cited his “sensitive crime” as a reason for restricting visits. Tashi Wangchuk’s lawyers have also faced harassment for representing him.

The prosecution’s argument at the January 2018 trial largely rested on comments the activist made in the video from 2015. At the hearing, Tashi Wangchuk stated that he rejected the idea that his attempt to rejuvenate the Tibetan language was a crime. Previously, he had said that he did not advocate for Tibetan independence and had instead called for rights protections for ethnic minorities as set out in Chinese law, including the right to use their own language. A Qinghai court rejected Tashi Wangchuk’s appeal in July 2018, stating that he had “distorted the facts, attacked the state’s policies on ethnic minorities, and made remarks that undermine ethnic unity and national unity.” The court’s ruling did not dispel the possibility that the activist may have been tortured into confessing crimes, and it acknowledged that foreign media coverage of his advocacy contributed to his prosecution.

Tashi Wangchuk’s lawyer Lin Qilei reported that prison officials denied the lawyers visitation with him on April 27, 2020 on the grounds of the coronavirus pandemic and that visits were indefinitely blocked until the pandemic was over.

Tashi Wangchuk’s case has come about amid growing state suppression of language and culture in Tibetan areas, which has intensified since President Xi Jinping came to power in 2013. Tashi Wangchuk told the New York Times that one reason he sought to highlight the importance of the loss of heritage language was because he could not find a place where his two nieces could continue studying Tibetan; local officials had closed schools run by monks and laypeople and also ordered a private school in the area to stop teaching the language.

Human rights experts working with United Nations bodies have levied consistent criticism of the government’s persecution of Tashi Wangchuk. The UN Working Group on Arbitrary Detention issued an Opinion in November 2017, stating that he had been arbitrarily detained and should be freed and receive compensation. After the activist was convicted, other UN Special Rapporteurs joined the Working Group in February 2018 and expressed “serious concern” over the case, describing it as “criminalization of linguistic and cultural rights advocacy.” In June 2018, these same UN experts condemned Tashi Wangchuk’s prison sentence as a “sanctioning of his right to freely express his opinion about the human rights of the Tibetan minority of China.” That August, the case was raised  at China’s review before the UN Committee on the Elimination of Racial Discrimination; when Chinese officials were pressed to explain Tashi Wangchuk’s incarceration, the delegation claimed it was due to acts involving “seceding from the Chinese state.”

Tashi Wangchuk was born in 1985 in Trindu County in Yushu Tibetan Autonomous Region in Qinghai. With an elementary school education, hedevoted himself to learning about pillars of Tibetan culture, studyingfor three years in a Buddhist monasteryand learning to write Tibetan with the help of his older brothers. Before turning to activism, Tashi Wangchuk made a living as a shopkeeper and online merchant selling Tibetan products, including caterpillar fungus, an herbal remedy found at high altitudesthat many in China believe has medicinal powers. He earned prominence through this work and even was featured as a model of a successful businessman in a 2014 promotional video by Alibaba, the online retail corporation.

Opinions adopted by the Working Group on Arbitrary Detention at its eightieth session, 20-24 November 2017, Opinion No. 69/2017 concerning Tashi Wangchuk (China)