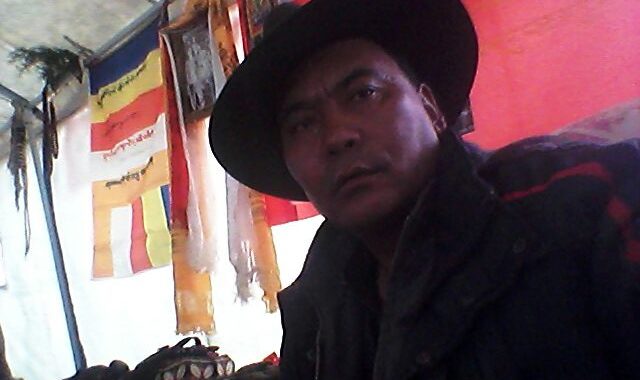 Tsegon Gyal, a prominent ethnic Tibetan writer and activist, received a prison sentence in January 2018 in apparent punishment for comments he wrote on WeChat criticizing the Chinese government for failing to genuinely promote its policy of “ethnic unity.” The verdict came down over eight months after a Qinghai court held a closed-door trial during which Tsegon Gyal was not provided legal counsel. Police detained Gyal in December 2016, though the exact criminal charges were unknown until police formally arrested him two weeks later.

Authorities held Gyal incommunicado at Gangcha (Kangtsa) County Detention Center until shortly before his sentencing, when authorities allowed family members to meet him. Gyal reportedly protested in detention by refusing to respond to police interrogators, who apparently were trying to force him to confess, and because authorities had not allowed a lawyer of his family’s choosing to represent him. In April 2017, the UN Working Group on Arbitrary Detention ruled that Gyal’s deprivation of liberty was arbitrary, that the court had not observed international norms related to the right to a fair trial, and that he should be released and compensated. The Chinese government did not reply to the Working Group and continued to prosecute Gyal.

Tsegon Gyal (aka Gangshon Atse) was born on August 12, 1963, in Amdo Province in the Tibetan Autonomous Region. He worked as a teacher after completing high school and then joined a county police force in Qinghai as a trace evidence analyst. Gyal later worked as a journalist for several years with Qinghai Tibetan News and Qinghai Legal Daily, receiving awards for his work.

Gyal served a previous prison sentence after being detained in May 1993, along with two other Tibetans, for helping form a group that allegedly organized activities to support Tibetan independence. In July 1994, Gyal was convicted of espionage and “counterrevolutionary” crimes and sentenced to 16 years in prison by a court in Haixi (Tsonub) Mongolian and Tibetan Autonomous Prefecture in Qinghai. After the Chinese government scrubbed crimes in the category of “counterrevolution” from the Criminal Law, in 1997, the Qinghai Province Higher People’s Court reversed Gyal’s conviction and sentenced him to six years for separatism, an offense under the criminal classification of “endangering state security.”

Once released from prison in May 1999, Gyal began working to spread awareness of disability rights and rehabilitation programs in Gangcha Town. A musical troop linked to this advocacy campaign was formed and performed all around China before Chinese authorities suppressed it, forcing Gyal to cease this activism. In 2015, when ethnic Tibetan pilgrims gathered at Qinghai Lake, a spot made sacred by a visit in the 1600s by the Fifth Dalai Lama, Gyal arranged for free provision of food and drinks, contributing to the revival of this religious tradition.

Opinions adopted by the Working Group on Arbitrary Detention at its 78th session, 19-28 April 2017, Opinion No. 4/2017 concerning Tsegon Gyal (China)