Hong Kong Authorities Must End Excessive Use of Force, Protect Freedom of Peaceful Assembly and Expression

June 13, 2019       Comments Off on Hong Kong Authorities Must End Excessive Use of Force, Protect Freedom of Peaceful Assembly and Expression 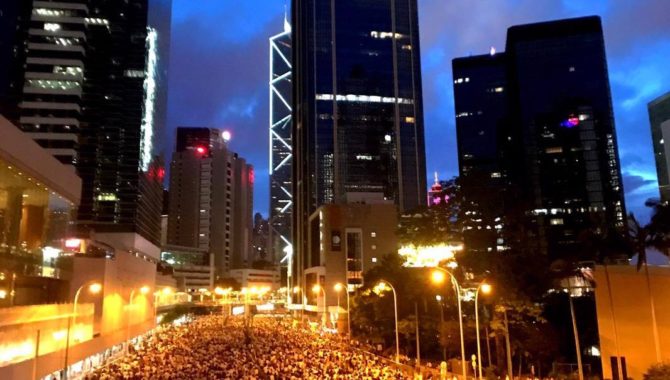 (Chinese Human Rights Defenders—June 13, 2019) Hong Kong authorities must stop using excessive force against unarmed and largely peaceful demonstrators and ensure protection of the rights to freedom of peaceful assembly and expression. Journalists, including citizen journalists, must be able to freely report on the demonstrations and police actions. Circulating information among the protesters must not be punished. Mainland authorities must respect the Basic Law and the “one country, two systems” framework.

On Wednesday June 12, Hong Kong Police Force used tear gas, pepper spray, rubber bullets, bean bag rounds, and batons against a crowd of mostly peaceful protestors after some stormed the Legislative Council building. The police declared the protests a “riot” around 3pm, and issued a statement citing the necessity to use escalated force to disperse the crowd after repeated warnings had been ignored. Over 80 individuals reportedly have been injured, with two in serious condition.

A local NGO with observers at the scene reported witnessing several instances of excessive police force used against protestors, of police officers firing weapons directly at protestors from a close range or at individuals who were fleeting with their backs turned to police. Videos have gone viral on social media that appear to show police officers beating unarmed protestors who had their backs turned, or were already in a subdued position. Others show police pepper spraying injured, non-threatening individuals.

Police also interfered with reporting on the protests and punished the circulation of information among protesters. The Hong Kong Journalists Association reported it had received 15 reports of police interference with journalists reporting from the scene. In addition, the night before the protest, on June 11, police reportedly arrested and released on bail one 22-year-old man who was an administrator of a social media group with over 20,000 members on Telegram, an encrypted messaging app, on suspicion of “conspiracy to commit public nuisance.” On the same day as the protests, Telegram reported it had been hit by a DDoS attack (distributed denial of service), with the company’s founder stating online that the IP addresses used in the attack came from China.

Hong Kong’s Chief Executive Carrie Lam described the protests an “organized riot,” despite no evidence that there had been a planned or executed disturbance of the peace by the majority of the demonstrators. Most of the images and videos from the protests, where plenty of journalists were present, show violence primarily coming from police officers.

Hong Kong is party to the International Covenant on Civil and Political Rights (ICCPR), which has been codified in local law through Article 39 of the Basic Law. The ICCPR and the Universal Declaration of Human Rights guarantee the rights to peaceful assembly and freedom of expression. The government of Hong Kong is legally obligated both under international law and domestic law to protect these rights.

The police cited Hong Kong’s Public Order Ordinance in declaring the protests a “riot.” The Ordinance has been criticised by the UN Human Rights Committee, which monitors implementation of the ICCPR, for failing to comply with the Covenant by violating the right to peaceful assembly. Under the Ordinance, police may declare an assembly as “unlawful” if three or more people are deemed to behave “disorderly, intimidating, insulting or [in a] provocative manner intended or likely to cause any person reasonably to fear that the persons so assembled will commit a breach of the peace” (Section 18(1)). An “unlawful assembly” becomes a “riot” when those taking part in an “unlawful” assembly commit “a breach of the peace” (Section 19(1)). Anyone convicted of “rioting” may be sentenced to up to 10 years in prison (Section 19(2)).

Under the UN Basic Principles on the Use of Force and Firearms by Law Enforcement Officials, police must avoid the use of force, or restrict such force to minimum extent necessary in the dispersal of assemblies that are unlawful but non-violent. Police restraint is also required for violent assemblies. The conduct of Hong Kong Police Force on June 12 did not meet these standards. Use of force is also based upon the concepts of legality, necessity, proportionality, non-discrimination, precaution and accountability. Several of the weapons used by the police, including tear gas and pepper spray, indiscriminately and disproportionately targeted peaceful demonstrators and residents uninvolved in the protests.

In 2015, the UN Committee Against Torture criticized the Hong Kong Police Force for excessive use of force against peaceful demonstrators in 2014 with regards to the “Occupy Central” pro-democracy movement.  The UN Human Rights Committee in its last review of Hong Kong in 2013 also raised similar concerns. In the Universal Periodic Review of China by the Human Rights Council in November 2018, China accepted a recommendation from France to “guarantee freedom of expression, assembly and association including in Hong Kong,” and declared that this was “already implemented.”

Hong Kong authorities must independently investigate allegations of excessive use of force, including instance of grievous bodily harm, and hold any perpetrators, including police officers, criminally accountable.