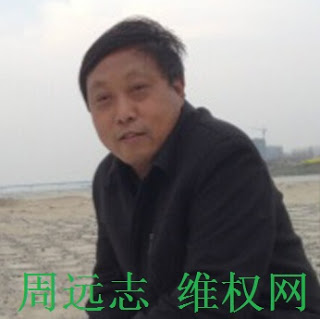 Zhou Yuanzhi, a writer and editor from Hubei Province, was handed a four-and-half-year prison sentence in June 2019, for his alleged efforts to help petitioners organize to present grievances to Chinese authorities, and for making “politically sensitive” online comments. After Zhou was initially detained in November 2017, he was issued a 15-day administrative detention but then criminally detained after completing that punishment. Zhou’s prison term was calculated based on conviction for three separate crimes; the court issued a two-year punishment for “organizing illegal gatherings,” three years for “picking quarrels and provoking trouble” and 18 months for “libel,” due to his social media posts.

Zhou’s first-instance trial took place without authorities giving sufficient notice to his family or defense attorney, leaving Zhou to speak to his own defense in court. Prior to the trial, two lawyers had dropped Zhou’s case after being pressured by authorities, and Zhou received his first lawyer visit only on August 1, 2018, after he had been in custody for nearly nine months. Lawyer Liu Zhengqing (刘正清), who had been representing Zhou at the time of his trial, had his law license revoked, and was never even allowed to visit his client.

Authorities transferred Zhou to Jiangbei Prison on December 25, 2019 after Jingmen Intermediate Court turned down his appeal on an unknown date.

On March 12, 2020, a Jiangbei Prison officer informed Zhou’s wife that Zhou Yuanzhi had been hospitalized in a prison hospital with heart tumors, hypertension, arrhythmia, cardiac dysfunction, cerebral infarction and other diseases. According to Zhou’s wife, his previous medical examination report did not show these conditions. She believes his health conditions were caused by persecution in Jingmen City Detention Center or Jiangbei Prison. She spoke to Zhou on the phone on March 15 and said that Zhou asked to see a lawyer and file a complaint.

Zhou, an Independent Chinese Pen member who has used the pen name Hua Liangxing (华梁兴), is known for his commentaries critical of the Chinese Communist Party’s leadership, including about social policies, official corruption, and other topics that authorities consider “sensitive.” Some of his prominent writings focused on the ways that rural residents reacted to the political malfeasance of then-President Jiang Zemin, and how the government has failed to recognize and protect the universal rights of Chinese citizens.

Zhou had previously been detained for acts of expression. On May 3, 2008, Zhou was taken into custody by national security officers in Zhongxiang City, Hubei Province on suspicion of “inciting subversion of state power,” likely due to elevated suppression against civil society prior to the Beijing Olympics that summer. He was held under “residential surveillance in a designated location” until being released on May 15, but subjected to numerous restrictions on his freedom of movement and expression. In 2011, Zhou was one of three Internet writers who had been deprived of their liberty who filed a lawsuit against California-based Cisco Systems Inc., accusing the company of providing information and technology to Chinese authorities that led to their detentions.

Born on February 22, 1961, Zhou majored in financial accounting at Zhongnan University of Economics in Wuhan City in Hubei and graduated in 1988. While a Chinese Communist Party member, Zhou worked as a taxation official in Zhongxiang until he was dismissed from his position, and also expelled from the party, after he submitted writings to overseas media in the 1990s.