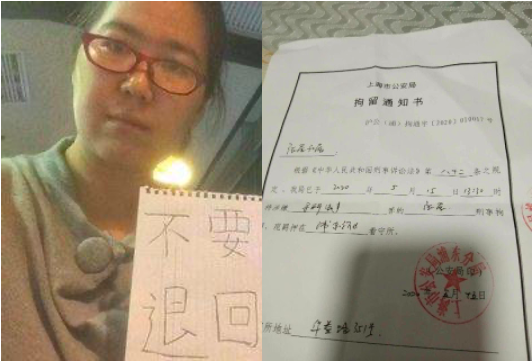 Shanghai police criminally detained citizen journalist and activist Zhang Zhan (张展) on May 15, 2020, on suspicion of “picking quarrels and provoking trouble.” She had initially gone missing on May 14 in Wuhan. Zhang Zhan is currently detained at Pudong New District Detention Center in Shanghai. She went to Wuhan, the epicenter of the coronavirus outbreak, in early February. She reported numerous stories including the detentions of other independent reporters and harassment of families of victims seeking accountability from the epicenter via her WeChat, Twitter and YouTube accounts.

A former lawyer, Zhang Zhan, born in the 1980s, has long been active in speaking out about politics and the human rights situation in China. She has been repeatedly harassed and threatened by the authorities. In 2019, she spoke out on the Hong Kong protests by posting comments, writing articles and holding up placards to support the protesters. In September 2019, she was summoned by Shanghai police and was later criminally detained on suspicion of “picking quarrels.” Police released her on November 26, 2019. During her detention, she was reportedly forced to undergo psychiatric examination twice.