May 18, 2020       Comments Off on Police Take Away Journalist Jiang Xue After Her Article Mourning Dr. Li Wenliang 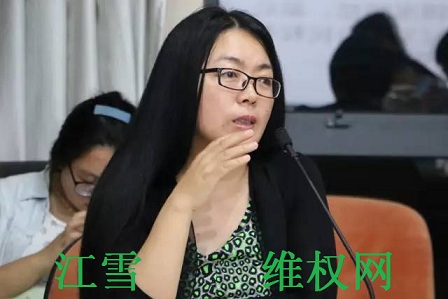 Update: Jiang Xue was released before midnight on May 18.

Officers from Gaoxin Division of Xi’an Public Security Bureau seized prominent journalist Jiang Xue (江雪) on May 18 around 7pm after she had visited her elderly mother in the hospital. Jiang had written an essay on China’s National Mourning Day on April 4 titled “On National Mourning Day, I Refuse to Join the Arranged Chorus.” That article is likely the cause for her being summoned for interrogation. Her whereabouts and the criminal charges against her are unknown.

Jiang has been an investigative journalist for the past 20 years. In 2009, she visited the United States as a guest of the US State Department’s “International Visitor Program.” She once worked at Southern Weekend but left in 2013 after the paper was ordered by authorities to reverse its liberal-leaning direction. In 2014, she quit as the chief journalist and opinions-page editor at Chinese Business News to protest censorship. Afterwards, she wrote articles for the Hong Kong-based The Initium or on her WeChat account.