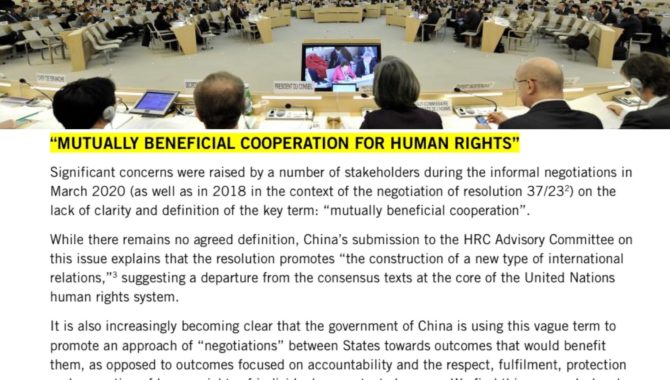 The United Nations Human Rights Council (HRC) held a brief debate in Geneva on June 22 over a draft resolution presented by China, which raised serious structural concerns about the future of the Human Rights Council and, more broadly, the multilateral UN human rights system.

CHRD joined other civil society groups to share concerns about the critical flaws of the China-drafted “mutually beneficial cooperation” resolution. We believe that, once adopted, this initiative would put the Council’s work back into the narrow confines of “dialogue” and “cooperation,” diverting it away from seeking accountability for abuses of human rights.

The draft resolution, once put into effect, would codify language directly taken from Chinese Communist Party propaganda – namely, China’s promotion for a ‘shared community of future’ modeled on its authoritarian governance at home – and its attempt to silence criticisms of rights abuses in the Human Rights Council platforms.

CHRD and other civil society groups urge HRC member states to protect, preserve, and strengthen the commitment to comply with international human rights standards and, as a matter of principle, vote against China’s draft resolution.