July 31, 2020       Comments Off on CHRD joins 16 other organizations to call on governments to take concrete measures on China’s National Security Law for Hong Kong 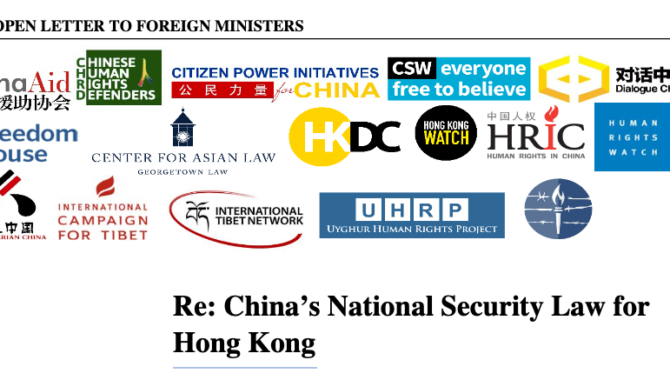 (Chinese Human Rights Defenders—July 31, 2020) Together with 16 other organizations, CHRD releases a joint open letter (中文版本) to foreign ministers of over 40 governments, calling for condemnation of the National Security Law in Hong Kong imposed by China’s National People’s Congress. The National Security Law has infringed on freedoms in Hong Kong. The letter calls on the governments to take action, including enabling activists in Hong Kong to find safe haven abroad and halting the sale of protest control equipment to Hong Kong and Chinese authorities.

Fear has been mounting among the civil society in Hong Kong as the law has been in force for one month. The latest crackdown took place on July 29, 2020. Hong Kong police arrested four former members (aged 16-21) of pro-independence student group Studentlocalism, which was disbanded before the law came into effect, on suspicion of “inciting secession.” They were released on bail pending further investigation on July 31, 2020. Police ordered the four to remove social media messages and banned them from leaving the city for the next six months.

On July 30, 2020, 12 pro-democracy candidates, including former legislators, were disqualified by election officials from running for the Legislative Council election due to their political views, criticism of the National Security Law, and because some of them called for foreign governments to sanction Beijing and Hong Kong officials. On July 31, 2020, the Hong Kong government announced that the Legislative Council elections, which was originally scheduled to take place on September 6, 2020, will be postponed for one year due to COVID-19.