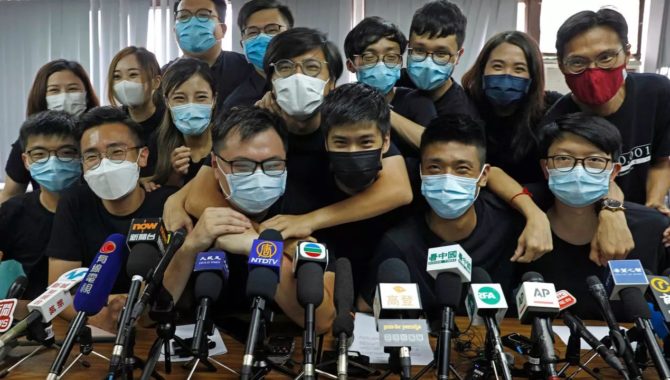 We, the undersigned 35 groups and organizations dedicated to promoting and protecting human rights, condemn the arrests of over 50 pro-democracy figures in Hong Kong. The arrests symbolize the ongoing weaponization of law to undermine the democratic aspirations and rights of Hong Kong people. The international community must continue to condemn this blatant political repression of HongKongers peacefully exercising their rights.

On the morning of January 6, over 1,000 Hong Kong police and security officers arrested 53 people, including every candidate currently in the city who participated in an informal primary to determine which pro-democracy figures would run for office in the next Hong Kong legislative elections. Over 600,000 people voted in this informal primary. Those arrested include former legislators, political campaigners, students, and lawyers. They have been accused of “subverting state power,” under the territory’s draconian new National Security Law, which carries a maximum penalty of life imprisonment. Police also froze bank accounts, searched private premises, and ordered four media companies to hand over materials.

This is a wholesale attack on democracy in Hong Kong, and a criminalization of freedom of expression, freedom of opinion, and freedom of association. We condemn these arrests in the strongest possible terms, and we stand in solidarity with those who have been arrested for exercising their rights under both international law and the Basic Law of Hong Kong. We call upon the Hong Kong authorities to publicly commit that they will not pursue charges against those arrested.

Hong Kong’s Chief Executive, Carrie Lam, previously assured HongKongers that the National Security Law would be used against only a small group of “criminal elements” and would not affect the lives of regular HongKongers. This week’s events make abundantly clear that this assurance was not true. Instead, the law is being used as a tool to crush any efforts to maintain democratic norms in Hong Kong. These arrests clearly highlight that the National Security Law and its implementation violate international guarantees of human rights.

Seeking to peacefully participate in the democratic process is not a crime. We call upon the Beijing government to withdraw or review and reform the National Security Law to ensure compliance with international human rights standards, and to recommit itself to respecting its people’s rights to peacefully express themselves and to politically organize.

Hong Kong has a proud tradition of a strong, engaged civil society and independent courts. This tradition is being destroyed before the eyes of the world. The international community must loudly and consistently condemn this repression as unacceptable and outrageous. These condemnations must also be followed by concrete steps to make clear to the Beijing government that these abuses will not be without consequences in terms of China’s international standing and relationships.

China Against the Death Penalty

Students For a Free Tibet

Students For a Free Tibet-India