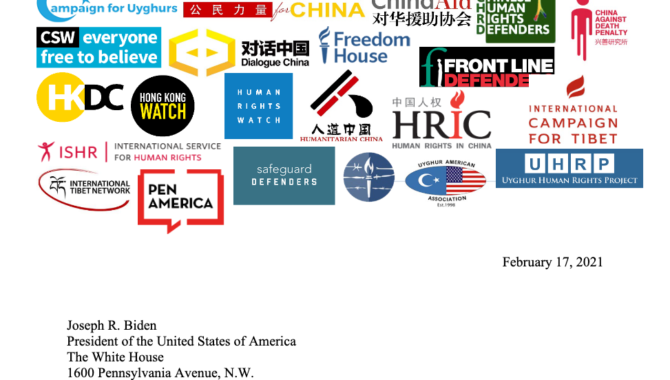 (Chinese Human Rights Defenders, February 18, 2021) CHRD joins 23 other organizations and individuals devoted to improving respect for human rights in China in an open letter to urge the Biden administration to make human rights a priority in US-China policy. The letter is sent at a time when the new administration is in the process of reviewing its approach to China. The groups note and appreciate remarks from the President and other senior officials, reflecting the gravity of Chinese government-inflicted human rights violations in Hong Kong and the Uyghur region/Xinjiang.

The scope and scale of human rights violations committed by the Chinese government inside and outside the country require a fundamental shift; many of the tools previously employed are no longer relevant or sufficiently robust, the letter says. To demonstrate that the United States will meet this challenge, the groups urge President Biden and his administration take the steps such as:

Making human rights a priority in China policy; playing an active role in international bodies that can promote human rights in China, supporting the June 2020 call by 50 UN human rights experts for urgent action on China, which could include a special session of the Human Rights Council, and the appointment of a special rapporteur to monitor and report on human rights violations by the Chinese government; supporting an international investigation into human rights crimes against Uyghurs and other Turkic Muslims in the Uyghur region/Xinjiang; focusing on technology, taking a principled global leadership role in technology by implementing comprehensive privacy legislation and reforming surveillance legislation, putting in place a series of escalating actions against technology companies found to be contributing to China’s mass surveillance, including by imposing Global Magnitsky sanctions; providing strong and steadfast support to human rights defenders and civil society activists across China; and treating the 2022 Olympics as a diplomatic matter; maintaining existing targeted sanctions.