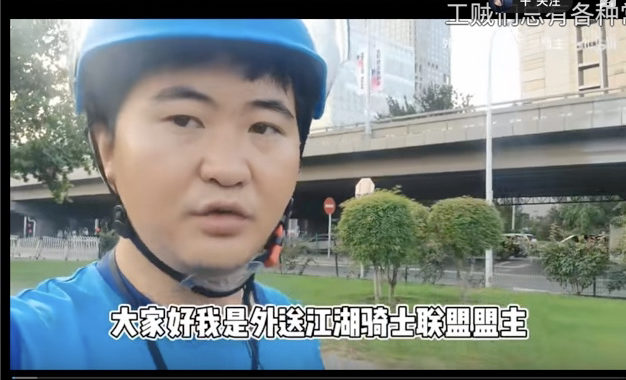 (Chinese Human Rights Defenders, March 17) The Chinese government must immediately release labor organizer, delivery worker, Chen Guojiang (陈国江), who was detained on February 25 in Beijing. Chen, a popular social media activist, had frequently posted about the precarious working conditions of frontline delivery workers in Chinese cities and had recently called for delivery workers to boycott companies that allegedly withheld some bonus money for workers who could not meet high demand targets during the Chinese New Year period.

A few other workers are said to be detained as well, but no detailed information is available at this point.

Chen Guojiang, also known as “Xiong Yan” and “Chen Tianhe”, is a former restaurant owner who became a motorbike delivery worker in 2019 after his restaurant business went under. Chen was appalled at the working conditions in the sector, and he became one of the founders of a WeChat group called “Alliance for Delivery Workers on Motorbikes in the Land of Lawlessness” (外送江湖骑士联盟) *, which was dedicated to connecting, organizing, and providing rights defense to delivery workers. Chen frequently spoke out on Weibo about the precarious labor conditions of delivery workers and made videos, in an effort to garner support from the general public.

Some supporters in China attribute Chen’s detention to the fact that his WeChat group has attracted over 10,000 followers, and he had become a de facto union-like leader for China’s roughly 7-10 million delivery workers, who played an essential role in providing essential services, especially during the COVID-19 lockdowns. According to Radio Free Asia, members from Chen’s WeChat group had planned to stage a strike in solidarity with Chen on March 8, but police took preemptive actions that the plan did not come to fruition.

Chen is believed to be detained at the Beijing City Chaoyang Detention Center. Chen’s father, Chen Wanhua, put out an open letter expressing concerns for his son, saying he still had no information about the police’s accusation against his son and he had not yet received a detention notice, which should be sent to family members within 24 hours of detention according to the Criminal Procedure Law. Chen’s sister, however, called the Chaoyang detention center, and the police claimed that they had mailed out the detention notice. Chen’s father, as a farmer making only 600 RMB per month, also hoped to raise 50,000 RMB for lawyers’ fees.

In recent years, China’s “platform economy”, including food delivery services, has taken on new importance to both the Chinese public and the Communist Party leadership. During the height of the COVID-19 pandemic, when many restaurants were closed and cities were on lockdown, food delivery orders surged, and delivery workers became indispensable to the basic functioning of Chinese society. Delivery workers have been widely lauded on social media for their heroism in performing tasks that epitomized the “essential worker.”  This week, the Chinese President Xi Jinping underlined the importance of the platform economy, including the need for the government to “…fill shortcomings, strengthen weaknesses, create an innovative environment, solve outstanding contradictions and problems, and promote the healthy and sustainable development of the platform economy”. Media outlets have also run in depth articles exploring the extraordinary pressures on delivery workers.

Despite this newfound social and political attention, China’s gig workers have few labor rights protections, and workplace problems are common, with at least seven strikes or protests by delivery workers since January 2020, according to China Labour Bulletin’s Strike Map. Workers have frequently complained of problems including long hours, uncertain pay scale, employer surveillance, and arbitrary deduction of wages or dismissals.

CHRD urges the Chinese government to immediately and unconditionally release Chen Guojiang. Pending his release, Chen should be allowed to see a lawyer of his choice and should be allowed contact with family members. The Chinese government should also ensure protection of freedom of association, expression, communicate, and the right to organize to protect their labor rights. The Chinese government should also immediately sign and ratify the International Labour Organization fundamental conventions: Convention 87 (Freedom of Association and Protection of the Right to Organise Convention) and Convention 98 (Right to Organise and Collective Bargaining Convention).