May 13, 2021       Comments Off on Chinese authorities must investigate torture claims by detained web designer 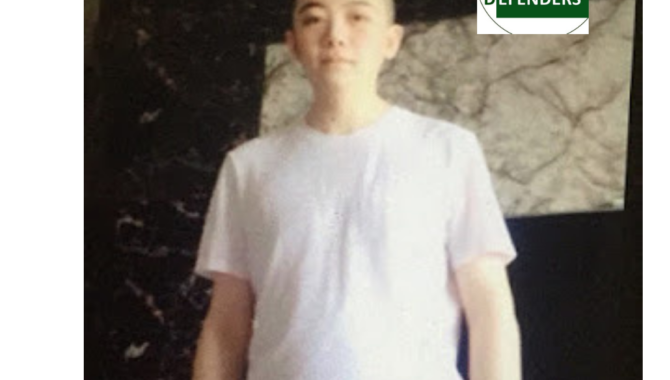 (Chinese Human Rights Defenders, May 13, 2021) A young man was hung up by the wrists while naked: and whipped, hit, and his genitals were burnt with a lighter. These and other internationally forbidden acts of torture were allegedly carried out by Chinese police officers in Guangdong against a website administrator. The Chinese government, a party to the Convention against Torture and Other Cruel, Inhuman or Degrading Treatment or Punishment, must immediately launch a prompt and impartial investigation of police officers accused of committing torture and prosecute any individuals who have been found to have violated Chinese law and international law, CHRD said on Thursday.

After two websites – Esu.Wiki and  Zhina.Wiki –  revealed private information related to Xi Jinping’s daughter and brother-in-law and other high-ranking officials, Chinese authorities carried out a nationwide manhunt, directed by a “special case team” (专案组), to prosecute individuals connected to the websites in August 2019. At least 24 people, some of them under 18, were detained across the country.

Esu.Wiki, which appears no longer reachable, whose name translates roughly to “Evil and Low-class Wiki”, was a website that published satire, memes, and news. Its motto was to “expose and record the truth” (揭露并记录事实).  This ethos included uncovering information that would otherwise not be allowed in China’s highly-censored online space and in a context in which TV and print media that must strategically serve as tools of the Communist Party in shaping public opinion. The website was registered and ran by individuals based overseas.

Niu Tengyu (牛腾宇), who made the allegations of the acts of torture to his lawyers, was detained on August 16, 2019 and eventually tried as the “ringleader” (主犯) of the case, although he was just then 20-year-old and only managed IT issues for Esu.Wiki.  On February 6, 2021 he was found guilty and sentenced by the Maonan District Court upon conviction of “picking quarrels and provoking trouble” (eight years), “violating others’ privacy” (five years), and “running an illegal business” (two years), for a total of 14 years. Later, in the second instance trial on April 23 at the Guangdong Maoming Court, in a trial in which his family and lawyers were not allowed to attend, the court upheld the first instance verdict without even considering the legal opinions of Niu Tengyu’s lawyers.

The heavy sentence was also reportedly due to the website’s posts on Hong Kong and Xinjiang, which the Chinese authorities view as politically “sensitive.”

According to information CHRD obtained and media reports, in October 2019, while he was detained in the Maopo Police Station in Guangdong province, Niu Tengyu was forced to sit in a “tiger bench” – a rigid metal restraint chair – and undergo non-stop interrogation for seven days and seven nights without being allowed to sleep.

While Niu Tengyu was in the notorious secret detention system known as “residential surveillance in a designated location” (RSDL) in late 2019 and January of 2020, every two or three days, an officer surnamed Chen, and another female officer and a high-ranking official, would strip him naked, hang him up by his wrists. These officials proceeded to whip and beat and berate Niu. Most shockingly, they burnt his private parts with a lighter and would also pour saline solution on his private parts. Niu was forced to kowtow to the officers inflicting the pain and humiliation. Each of these torture sessions would typically last approximately two hours.

The officers stripped him naked and took photos of him while naked. They made a photo album, included nine such nude pictures, named “Esu Niu Tengyu” (Vulgar and Low-class Niu Tengyu). International human rights bodies have found that forcing detainees to become naked while in front of others can constitute a form of ill-treatment.

On January 13, 2020, from approximately 1pm to the next morning at 1am, Niu Yuteng was hung up by his wrists and beaten, losing consciousness many times during the ordeal, to the extent he thought he would die.  The hanging damaged the nerves of his righthand thumb and index finger.

Niu Tengyu met with his mother for the first time on May 4, 2021, the first time since being detained in August 2019. Although she said he “appeared in good spirits,” likely to comfort his mother, Niu refused to let her see his fingers that suffered permanent damage as a result of torture.

China ratified the international Convention against Torture (CAT) in 1998. It has an obligation to implement the provisions of the convention through its domestic law and legal procedures in order to come into compliance. In 2015, China’s implementation of CAT was last assessed by the Committee against Torture, and in 2016, the Committee issued its Concluding Observations with recommendations for China to close the gap.

The allegations made by Niu Tengyu, collaborated by recent allegations by other detainees, point to many serious and ongoing failures of the Chinese government to implement the Concluding Observations.

The UN treaty body urged China “…to adopt effective measures to ensure, in law and in practice, that detainees are afforded all legal safeguards from the very outset of the detention.” But Niu Tengyu was unable to see a lawyer in the early months of his detention and throughout his time in RSDL.

The Committee urged China to “…(g)uarantee that complete audiovisual footage of the interrogation and related written documents are systematically transmitted to the relevant procuratorate, and a copy is made available to the defence and the court.” But no such transmission is known to have taken place. Niu Tengyu’s lawyers have filed a request to have the investigators give testimony in court, and for all of the audio and visual recordings of his interrogation be presented in court.

In its 2014 state party report to the Committee against Torture, the Chinese government boasted that “…the oversight of investigative powers has been further strengthened, with stipulations that audio or visual recordings be made of the interrogation process, and moreover that such recordings must be uninterrupted, in order to maintain their integrity and prevent the unlawful collection of evidence”.  Recording interrogations is indeed an important safeguard in deterring torture and holding perpetrators to account, but the efficacy of such a safeguard is rendered worthless in this case since the lawyers have not been able to access the recordings and the state has refused to investigate Niu’s allegation of torture.

The Committee said that China “should adopt effective measures to strictly enforce the new legal provisions and guarantee that coerced confessions or statements are inadmissible in practice, except when invoked against a person accused of torture as evidence that the statement was made.” Yet, Niu’s lawyers’ request to dismiss illegally obtained coerced confessions has not been granted nor has the relevant measure been “strictly” enforced.

The Committee re-affirmed that “All reports of torture or ill-treatment are promptly, effectively and impartially investigated.” Yet there is no indication that an investigation is being conducted, despite the complaints filed by Niu Tengyu’s lawyers.

The Committee urged that “Persons suspected of having committed torture or ill-treatment are duly prosecuted and, if they are found guilty, receive sentences that are commensurate with the gravity of their acts and victims are afforded appropriate redress” but there is also no indication that anyone has been punished and Niu Tengyu and others have not been afforded redress.

The Committee urged that China “should repeal, as a matter of urgency, the provisions of the Criminal Procedure Law that allow suspects to be held de facto incommunicado, at a designated location, while under residential surveillance.” But China has not amended the Criminal Procedure Law that allows for legalized incommunicado detention under RSDL, where Niu was allegedly subjected to torture. This lack of action stands in defiance of the UN independent experts, who have ruled on multiple occasions that such a form of secret detention is incompatible with international human rights law.

CHRD calls on the Chinese government to immediately launch a “prompt and impartial investigation” in line with Article 12 of CAT. If anyone is found to have committed an offense with reference to the treaty, they should face prosecution according to the law. Given that Niu’s conviction and 14-year prison sentence were based on “illegally obtained evidence” – extracted through torture – and that other violations of the right to a fair trial occurred, the evidence against him should never have been admissible in court trial and he should be freed. Any legal case brought against him must proceed with safeguards of his due process rights.