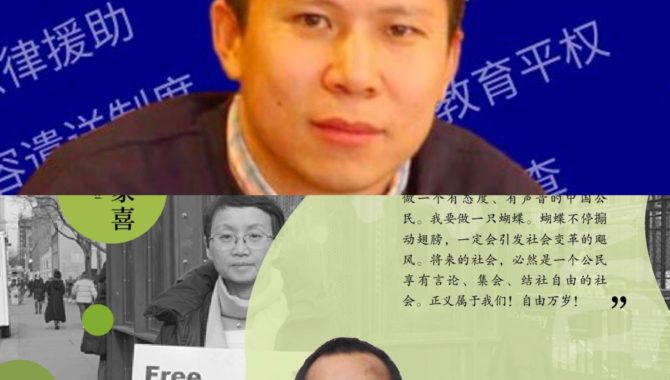 Chinese authorities may use the lull around the Christmas and New Year’s holidays to subject prominent human rights defenders to unfair trials while much of the international community is distracted, PEN America and China Human Rights Defenders warned today in a joint statement. Xu Zhiyong and Ding Jiaxi, two human rights defenders who have worked to mobilize Chinese citizens toward civic responsibility and the exercise of their rights, are chief among those who may be targeted for such judicially-sanctioned repression. They face charges of “subversion of state power”, which could carry a maximum sentence of life in prison, and they could be put on trial at any time.

“Human rights lawyers Xu Zhiyong and Ding Jiaxi are facing charges that carry a potential life sentence—yet their only true ‘crime’ has been to peacefully advocate for reform. Since the state has treated these two as dangerous dissidents, it is most likely that they will receive an unfair trial where the outcome is already ordained. Chinese Communist Party leaders know that by pursuing these charges, they are trampling on Xu and Ding’s human rights and violating international law—so they may choose to conduct Xu and Ding’s trial at a time when journalists and diplomats are distracted,” said James Tager, Director of Research at PEN America. “We want these officials to know that we are paying attention, and we urge the international community to do the same. The government must drop these charges against Xu and Ding and recognize that peacefully calling for reform is not —and should never be treated as—a crime.”

“It is crystal clear that the government’s case against Xu Zhiyong and Ding Jiaxi is based on their peaceful expression of political views about democratic reform and a new form of participatory citizenship in China. To make matters worse, the key government witnesses have withdrawn their testimony and the ‘evidence’ left is based on what police extracted by torturing Ding and Xu. China has claimed to be a ‘democracy’ in recent weeks, but the prosecution of Ding Jiaxi and Xu Zhiyong highlights how absurd that claim to being a democracy actually is”, said William Nee, Research and Advocacy Coordinator for Chinese Human Rights Defenders (CHRD).

Xu Zhiyong and Ding Jiaxi are human rights lawyers and leading figures in the “New Citizens Movement”, a civil society movement which has attempted to popularize a new form of civic engagement within China. In early December 2019, both men met with colleagues at an informal gathering of civil society advocates in the coastal city of Xiamen; in the days and months after the meeting, Chinese security forces apprehended many of the attendees. Ding Jiaxi was apprehended December 26, 2019 and Xu Zhiyong was apprehended in February 2020. Both Ding and Xu spent long periods of time incommunicado before being formally arrested; neither man had access to a lawyer until January 2021. Both men have alleged that they have been tortured while in custody.

The indictments against Ding and Xu accuse them of forming the “Citizens Movement,” creating a Telegram group chat, and organizing the December 2019 Xiamen meeting. The indictments also point to both men’s writing—such as essays and articles—as “evidence” of their crimes. The UN Working Group on Arbitrary Detention has issued opinions deeming the detentions of Xu and Ding to be arbitrary under international law, and has called for their immediate release.

On December 8, 2020, PEN America recognized Xu’s courage with the PEN/Barbey Freedom to Write Award, awarded annually to recognize an imprisoned writer targeted for their free expression. The award was accepted on his behalf by Xu Zhiyong’s fiancée, rights activist Li Qiaochu. Li was herself detained on February 6, 2021 on suspicion of “subversion” after posting information about Xu and Ding’s treatment in custody, and is currently still detained. She was not permitted access to a lawyer until August 27; activists have expressed serious concerns over her physical and mental health.

Expert commentators have long warned that Chinese authorities tend to pursue criminal trials against prominent dissidents in late December, when many members of the international community—such as diplomats, journalists, NGO workers, and human rights activists—are out-of-office or otherwise distracted with Christmas and New Year’s. Among the human rights community, this repressive tactic from Chinese authorities is so common it is referred to as a “Christmas surprise.”