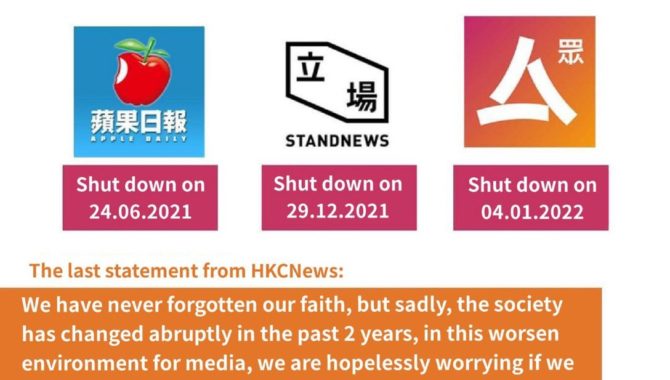 In a series of calculated moves, taking advantage of a lull in international attention during the holiday period between Christmas and New Year, the Chinese authorities rushed through a number of acts in violation of human rights in the areas of freedom of expression, press freedom, and religious freedom. In Hong Kong, over 200 police officers raided one of the last remaining independent news outlets, Stand News. On the Mainland, authorities subjected a prominent dissident intellectual, Guo Feixiong, and human rights lawyer, Tang Jitian, to enforced disappearance, put on trial five Christians, a human rights activist, and a human rights lawyer.

Taken together, these acts of human rights violations signal that there will be little change in 2022 from the bleak human rights situation in 2021.

CHRD urges the Chinese government to end its assault on press freedom in HK, its religious persecution, and prosecution of human rights defenders.

On December 29, nearly 200 police officers raided the office of Stand News, with Steve Li, senior superintendent of the Police National Security Department, accusing the outlet of having published “seditious materials”. The officers confiscated phones, computers, and cash, and arrested seven people.  By 4pm, the organization had announced that it had ceased operations. The next day, chief editor Chung Pui-kuen and acting chief editor Patrick Lam were denied bail, while four other arrested Stand News board members – Margaret Ng, pop star Denise Ho, Chow Tat-chi and Christine Fang – were released on bail.

After a wave of international criticism about the raid and arrests, from the UN, EU, US, Canada, and Germany, Hong Kong officials lashed out and threatened critics. Justice Secretary Theresa Cheng wrote that the international community’s demands to release those who were arrested was “…in blatant violation of international law and the basic principle of non-intervention.” After the Wall Street Journal published an editorial about the incident (“No One is Safe in Hong Kong”), the Chief Secretary John Lee wrote a letter to the editor in which he dismissed the editorial as “biased misrepresentation of the facts” and urged the WSJ to “support” the arrests in the name of press freedom.

The recent pushback against human rights criticism comes after Hong Kong’s secretary for constitutional and mainland affairs Eric Tsang earlier in December warned the WSJ about another editorial it wrote (“Hong Kong says Vote – Or Else”) and implied that the WSJ may be breaking the law. Tsang said, “We reserve the right to take necessary action irrespective whether the incitement is made in Hong Kong or abroad.”

Stand News was one of the few independent media outlets still operating in Hong Kong, a city that used to be known for its vibrant media culture.  In the wake of the crackdown on Stand News, Citizen News decided to cease operations on January 3, 2022, with its editor saying they could no longer judge where the “legal boundaries” are.

On December 28, five members of the Zion Reformed Church in Shanxi Province were put on trial at on the charge of “illegally crossing the border”. The five, Zhang Ligong, Zhang Zhaowen, Wang Runyun, Wang Shiqiang, and Song Shoushan, had attended the “KL2020 Gospel and Culture” in Malaysia in January 2020. The event was organized by the influential Indonesian pastor Stephen Tong, and was attended by prominent pastors including Tim Keller and D.A. Carson.  Although the five traveled with their passports and returned to China legally, they were subsequently detained in July of 2021, more than 18 months later.

Also on December 28, pastors An Yankui and Zhang Chenghao of the Zion Reformed Church were arrested on the same charge. The two had been criminally detained in November 2021.

As CHRD has previously reported, this crackdown on Christians is part of a broader campaign to tighten all ideological forms of thought not explicitly controlled by the Chinese Communist Party.

On December 27, 2021, the Zhengzhou City Zhongyuan District People’s Court sentenced activist Sun Zhijun to 1 year and 3 months on the charge of “picking quarrels and provoking trouble”.

Sun, who became a veteran petitioner on account of a forced eviction, petitioned to Beijing along with five other people on October 25, 2020, on the eve of the Fifth Plenum, a major political event. Fearing this would reflect negatively on their record, Zhengzhou authorities “retrieved” him from Beijing and sent him back to Zhengzhou, in central China. He was subsequently administratively detained for 14 days, and on December 17 then he filed real—name complaint against three Zhengzhou officials alleging them of misuse of power and using excessive force and unlawfully using national funds allocated for compensation in evictions. On the next day, in an apparent act of retaliation, he was summoned on the charge “harming the social order” and subsequently criminally detained on the charge of “picking quarrels and provoking trouble”.

Sun has reportedly suffered in detention and has been forced to stand still for periods longer than an hour, causing him to faint and need medical assistance.

On December 31, amidst a heavy state security presence, disbarred human rights lawyer Qin Yongpei went on trial at the Nanning City Intermediate Court in a hearing that was not open to the general public.  The lawyer for Qin Yongpei wanted seven witnesses to attend, but the court did not allow the defense’s witnesses to testify.

Qin Yongpei, was detained in October 2019 in apparent retaliation for criticizing on social media the corruption of high-level Chinese officials. According to the indictment, however, the authorities mainly accused Qin of “using Weibo and Twitter to degrade and spread rumors about state leaders with malicious intent, attack the regime and socialist system, and incite the mass who are not familiar with the real situation to initiate doubts about the regime and socialist system since 2014.”

Qin, who was disbarred in May 2018 for taking on “politically sensitive” cases, was among several disbarred lawyers who set up in September 2018 what they satirically named the “Chinese Post-Lawyers Club” (中国律师后俱乐部). The lawyers, though prohibited from representing clients at trial or visiting them in detention, vowed to keep providing legal consultation to victims of rights abuses and to push for rule-of-law reforms. By November 2018, Chinese authorities had targeted the group and declared it an “illegal organization,” and police officers raided one location where the club had met in January 2019.

According to Qin’s wife Deng Xiaoyun, who was the only person affiliated with Qin to attend, Qin maintained his innocence. The sentence will be announced on another day.

Besides these cases, two HRDs have gone missing since December 10 – International Human Rights Day. CHRD is concerned that these HRDs may remain in extrajudicial detention or may be formally detained:

At this critical juncture, when the Chinese government is pushing back more aggressively against its critics, suppressing dissent and ethnic minorities, poised to host the Beijing Winter Olympics, and with Xi Jinping set to be coronated as the supreme leader for life, it is vital that the international community, in solidarity, delivers a firm message to the authoritarian leaders of the Chinese government that we will take strong actions to defend the universal values of human rights, justice, and rule of law.