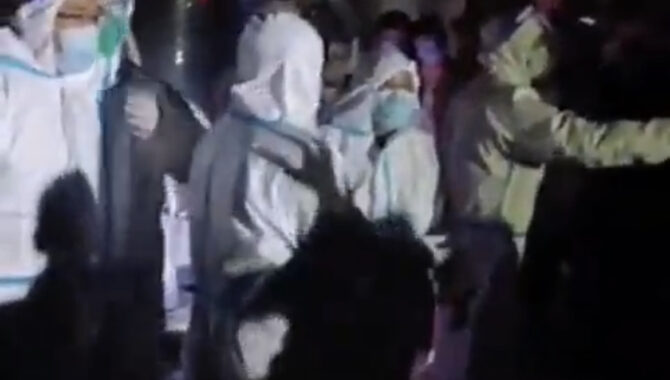 The Chinese government must protect the right to food and provide urgent care for the 26 million residents in Shanghai and many others in cities currently under COVID-19 lockdown. Authorities must immediately stop censoring affected residents’ expressions of outcries for help with basic necessities and concerns over government COVID-19 measures on Chinese social media platforms.

CHRD urges Chinese authorities to protect freedom of the press and communication, allowing residents in lockdown to share information and proposed solutions to any practical problems they are experiencing, e.g., in finding food, saving the lives of people suffering from other acute health conditions, and preventing family separation.

Suppressing freedom of expression and opinion, free media, violates basic human rights. Such censorship of information and appeals for help online in a crisis has serious consequences and can have a harmful impact on saving lives and on the state’s ability to perceive and react to life-threatening problems, thereby negatively affecting the right to livelihood and the right to health.

On March 28, the government of Shanghai, China’s most prosperous commercial center, imposed a citywide lockdown to bring down the transmission rate of COVID-19 to zero. While conditions in different districts of the city vary, there have been widespread reports on social media that families have run out of food supplies and have had troubles in finding basic necessities to purchase online. Several people with other health emergencies have died due to being denied care at hospitals.

In another video, a man was filmed expressing his frustration to a local official implementing lockdown, saying that he had only prepared enough food and water to last until April 5,  when the lockdown was stated to have ended, but when the lockdown was unexpectedly extended he was unable to buy more supplies as the local stores were closed. He also said that he was unable to help take care of his elderly parents or his grandmother, who lives alone without care.

For much of early April, Shanghai had separated children as young as a few months who had tested positive for COVID-19 from their parents in quarantine facilities, until the policy was reversed. Some parents still have troubles reuniting with their children.

On April 9, videos emerged of Shanghai residents yelling out of their apartment buildings in an apparent act of frustration and anger and desperation.

Tension is rising. Radio Free Asia posted a video showing armed government officials in PPE breaking down a glass sliding door to wrestle down a man who had locked himself on a porch to resist being taking him to a quarantine center. In another video that surfaced on April 13, a man yelled at a government official who was doing an inspection tour, and told him that people were unable to buy food to eat or purchase things online.

On April 8, Shanghai Internet Administration authorities issued a directive to ban “rumors” on the Weibo and WeChat, and to underscore to internet users that they could be punished by law if they “created, shared, published, or issued content that spread rumors, disrupted the social order, or harmed social stability”.  The directive reminded social media group admins and group users not to spread such content and that they could face legal consequences. On April 13, Shanghai police announced that they had initiated investigations against 13 people involved in spreading rumors, and this news item was the most trending on Weibo, where the state can influence which news items trend.

As a result, although lockdown-related topics have been popular on social media, including posts about newly-built, unsanitary quarantine facilities, strict censorship has deleted, blocked many online messages, photos, videos posted by users.

One widely circulated post that was later censored stated:

Many people around me rely on drinking congee and eating instant noodles every day for a long time.

I know many people don’t believe me, if I didn’t know it first hand, I wouldn’t believe you if you told me that in 2022, people in a cosmopolitan city can’t buy food every day and eating is a problem, but it’s really happening.”

Most worryingly, the lockdown has affected residents who need non-COVID-related urgent medical care. As AP and HRW have reported, many people in Shanghai with treatable medical conditions have died of preventable death due to denied care by hospitals, which are under order to prioritize COVID patients. One such person was the mother of the economist and social commentator Larry Lang.  His mother died of kidney failure outside of a medical facility while she waited four hours for her COVID test result needed to enter the facility. Lang said on social media that due to the lockdown, he could not see his mother one last time. Citizen-compiled lists of such deaths have reportedly been censored.

On April 11, Shanghai authorities announced a “differentiated approach” to COVID management that was seen as a sign of easing the severity of lockdown.  According to the announcement, housing communities within the city would be divided into three tiers based on risk levels, with the highest risk and subsequent 7-day lockdown being imposed on any community where a positive case had been reported. And yet, despite the announcement of this differentiated approach, there were reports that all residents in Xuhui District were to be locked down on April 11, and so it is unclear how the policies are actually implemented going forward.

At the same time, on April 11, the People’s Daily and other state media outlets insisted that there would be no deviation from the “dynamic Zero COVID” policy. Indeed, on April 11, Party Committee Secretary of Shanghai, Li Qiang, visited local sites in the city and urged for carrying out the “Spirit of Xi Jinping’s important instructions”, maintaining a “dynamic Zero COVID” policy, strictly implementing anti-pandemic demands, in order to “win the hard fight against the virus”.

While the situation in Shanghai has received considerable international and domestic attention, it’s important to note that, as Omicron spreads, many other cities are experiencing some form of “Zero COVID” restrictions despite the negative impacts on the lives of many more millions of residents. Gavekal, a global investment research company, has estimatedthat all but 13 of China’s top 100 cities had enacted some quarantine policies.  At the time of publication, the southern economic powerhouse city of Guangzhou had identified 27 cases and was initiating more strict measures. Wuhan launched a policy of mandatory testing for riding the bus and subway. There is no clear acknowledgement of nor any plan by the government to address the severely harmful impact on affected residents.

The need to prioritize protecting lives over politicization

“Dynamic Zero COVID” should be seen as a means, a tactic, to achieve positive health outcomes, the end goal. The WHO has noted that lockdowns can slow transmission, but they also “…can have a profound negative impact on individuals, communities, and societies by bringing social and economic life to a near stop” and can negatively impact disadvantaged groups.

However, since the Chinese government’s “dynamic Zero COVID” approach has been elevated to a national “general policy”— decreed by President Xi Jinping, given the CCP’s highly authoritarian, top-down, system, in which all government officials acted to please the higher ups at all levels, officials have become incentivized to do whatever it takes to achieve the top leader’s goal of “Zero COVID.” The zeal to achieve such a goal demands the measures be taken despite the fact that they are not proportionate to the harms done and they inflict severe negative social and economic costs.

Local authorities at provincial and city levels fear losing their political careers if they dared to disagree with or defy the Central government’s “important instructions”.  Chinese government officials have also invoked “zero COVID” to differentiate the CCP’s supposedly superior system in dealing with the pandemic compared to allegedly poor COVID management in the West (without noting that there have been vastly different rates of COVID transmission and death rates within the numerous countries that are colloquially lumped together as the West).

The arguments for a “dynamic Zero COVID” policy are marshalled on a daily basis in official speeches and state media. However, the downsides of the policy are generally shielded from view via censorship.

This includes not just the economic costs of shutting down major trade and manufacturing hubs, the delays and chaos caused to international trade when busy ports shut down, rising inflation, and decreased economic growth due to the lockdowns, but also, more importantly, harmful ramifications for protecting social and economic rights, including those we have pointed out above.

While quarantine policies and other measures may be necessary in combating the pandemic, widespread censorship only makes it more difficult for the public and even policymakers to accurately assess the situation, adjust policy responses, prevent any unintended harmful consequences, and save lives from preventable deaths.

“The right of civil society actors, including journalists and human rights defenders, to freely seek, receive and impart ideas and information, whether concerning the crisis and its management or other subjects, must be ensured.”

The UN Special Rapporteur on Freedom of Expression also raised concerns that with respect to China in the past during the COVID-19 pandemic there were instances in which the repression of freedom of expression had “a direct impact on public health information”.

Two years into the COVID-19 pandemic, the Chinese government has defied these warnings and its pandemic measures have violated basic human rights.