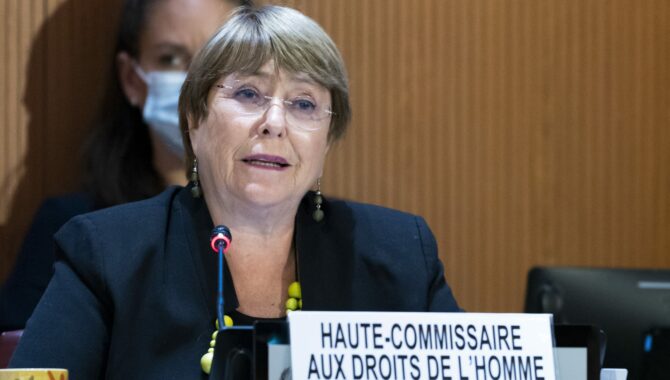 UN High Commissioner for Human Rights Michelle Bachelet announced on 8 March that she has secured a visit to China ‘foreseen to take place in May’. Her announcement in an update to the UN Human Rights Council comes three and a half years after she publicly requested unrestricted access to China for the first time. Over this period, the undersigned organisations consider that she did not take adequate public diplomacy steps, including official statements, to respond to allegations of serious rights violations in the country in a timely manner.

In contrast, nongovernmental organisations, UN Special Procedures[1] and Treaty Bodies[2] have collected a diverse and extensive body of information detailing grave human rights violations, that could amount to crimes against humanity, or even genocide. In June 2020, 50 Special Procedures experts called for ‘decisive measures to protect fundamental freedoms in China’, including the establishment by the Human Rights Council of ‘an impartial and independent United Nations mechanisms to closely monitor, analyse and report annually on the human rights situation in China.’ They reiterated grave concern at a range of issues including forced labour, the ‘collective repression of the population, especially in Xinjiang and Tibet, the detention of lawyers and prosecution and disappearances of human rights defenders across the country’ and ‘the repression of protest and democracy advocacy in Hong Kong.’

In her report to the Human Rights Council on secret detention in the context of countering terrorism, UN Special Rapporteur Fionnuala Ní Aoláin underscored the ‘pressing need for independent human rights assessment and accountability for violations of international law’ in the context of mass arbitrary, and secret detentions and forced labour in Xinjiang, the Uyghur region.

We express deep concern that the High Commissioner’s 8 March announcement did not include any mention of the expected release of her Office’s report on serious human rights violations in Xinjiang, the Uyghur region. In September 2021, ‘regret[ting] not be[ing] able to report progress’ on negotiations for access, Bachelet had confirmedthat her Office was ‘finalising its assessment of the available information on allegations of serious human rights violations in [Xinjiang], with a view to making it public.’ In December, a spokesperson for the Office of the UN High Commissioner for Human Rights (OHCHR) stated the report would be released ‘in a matter of a few weeks.’

We regret the perceived lack of coherence in the High Commissioner’s approach to addressing the human rights crisis in China, which poses a risk to the credibility of the OHCHR, and its perceived ability to tackle serious allegations against a major power.

We are also concerned that the High Commissioner has remained silent on the human rights crisis in Tibet, in contrast with her predecessors.

We take note that an ‘advanced OHCHR team’ would depart to China in April to prepare her stay, ‘including onsite visits to Xinjiang and other places’, and that ‘preparations will have to take into account Covid-19 regulations.’ The country, now facing its highest peak of infections ever, has put in place highly restrictive measures under its ‘zero-Covid’ policy, including localised and city-wide lockdowns implemented with little notice, and a 21-day quarantine for international visitors.

We express concern that the High Commissioner’s update to the Human Rights Council does not provide any indication as to whether the conditions negotiated with the authorities allow for unhindered access, for which she has previously called. A number of factors prompt significant concerns about the likelihood that such conditions – the details of which remain undisclosed – are effectively met, despite China’s commitments.

China is, alongside Saudi Arabia, the country most often mentioned in the UN Secretary-General’s annual report on ‘reprisals’ against individuals and groups cooperating, or seeking to cooperate with the UN. In the 2020 report, China was listed among the 11 countries cited for engaging in ‘patterns of reprisals’, and later identified as one of five countries with ‘serious issues with the detention of victims of reprisals and intimidation.’

Following his country visit to China in 2016, then-Special Rapporteur on extreme poverty and human rights Philip Alston detailed in his report to the Human Rights Council measures that made him ‘unable to meet with the great majority of civil society actors with any degree of freedom or confidentiality’, including that the Government ‘advised him not to make direct contact with civil society organisations to arrange meetings, and requested full details of any private meetings held’, while also warning him ‘not to meet with individuals it considered ‘sensitive’’ and ‘regularly follow[ing him with] security officers posing as private citizens, thus making it virtually impossible to meet privately with civil society organisations and individuals.’ One of the only activists he could meet with, lawyer Jiang Tianyong, was detained for nearly three years following his encounter, and remains today arbitrarily held under de facto house arrest, and strict surveillance.

China’s government has also regularly recalled its position that it would only allow for a ‘friendly visit’ by the High Commissioner aimed at ‘promoting exchanges and cooperation’, and not ‘a so-called ‘investigation’ with presumption of guilt.’

In this context, the undersigned civil society organisations consider that the following core minimum conditions must be met in order for any visit to China by the High Commissioner to be credible.

[4] These standards draw on, among other resources, the ‘Terms of Reference for Fact-Finding Missions by Special Rapporteurs/Representatives of The Commission on Human Rights’ [E/CN.41998/45 Appendix V],