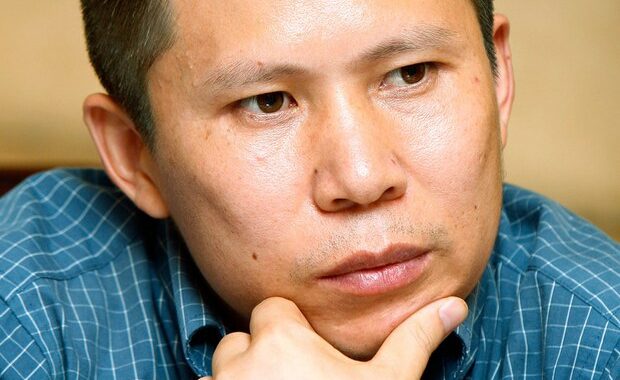 The trial comes amid allegations that Xu and rights lawyer Ding Jiaxi were tortured while in detention.

Rights groups called for the release of Chinese dissident Xu Zhiyong, who has reported being tortured in detention, as his trial for “subversion” went ahead behind closed doors on Wednesday.

“Once it was decided that in the name of the law that they announced the trial would be non-public, a lawyer can just be a witness, to witness that [Xu] doesn’t just enter darkness,” Zhang said.

CHRD said police had also harassed Xu’s sister who traveled to attend the trial at Linshu County People’s Court in Linyi city, Shandong province, raiding her hotel room in the middle of the night and forcing her to leave.

“Not only was she unable to attend her brother’s trial; she wasn’t even allowed to stay in the area,” Luo tweeted. “Does this darkness mean that dawn is coming soon? I hope so!”

Luo said the trial had been moved to Linshu county to keep it out of the public spotlight.

“In order to prevent witnesses from testifying in court, they put them all under house arrest; in order to prevent the media from reporting it, they kept proceedings secret and forced lawyers to sign non-disclosure agreements,” Luo wrote.

“They tortured to extract confessions, fabricated evidence and lies, and I will carry on exposing them to the rest of the world!” she tweeted.

Xu’s trial on charges of “subversion of state power” has been widely criticized by rights activists as resulting from a trumped-up charge.

“The Chinese government is making a grave and shameful mistake by proceeding with the trial of Xu Zhiyong,” Liesl Gerntholtz, director of the PEN/Barbey Freedom to Write Center at PEN America said in a statement.

She added: “Xu has not committed a crime. He is a leading public intellectual using his words to try to hold the Chinese government accountable to Chinese citizens.”

Rights groups say Xu’s case has been marred with due process violations, including torture and incommunicado detention for nearly two-and-a-half years.

“We call on the Chinese government to immediately drop all charges against Xu and release him from detention. We also urge an independent review of the harrowing reports that Xu has been tortured,” American PEN said.

CHRD has echoed calls for the release of Xu and rights lawyer Ding Jiaxi, whose trial is scheduled for June 24.

“CHRD urges the Chinese government to immediately and unconditionally release the two human rights defenders,” the group said in a recent statement. “The Chinese government must heed the opinions of UN experts who found that Xu and Ding are being arbitrarily detained in violation of international law.”

The trials come ahead of the United Nations International Day in Support of Victims of Torture, CHRD said, adding that Ding had also reported being tortured while in detention.

The entire case against Xu and Ding stemmed from the men’s “peaceful advocacy,” the group said.

It cited Ding’s wife Luo Shengchun as saying that neither man’s lawyers have been allowed to meet with them during the past three months, and had been barred from making copies of the case files.

“Not allowing lawyers to make copies means that lawyers may have to read and take notes on hundreds of pages of case files at one fixed time in an office, which obviously impairs their capacity to adequately prepare for a legal defense,” CHRD said.

Ding’s lawyers say he was restrained in a “tiger chair” between April 1 and 8, 2020, and interrogated for 21 hours a day, subjected to sleep deprivation and limited food and water.

Ding and Luo have both filed applications to exclude the evidence against him as having been obtained illegally, under torture, but with no success.

Xu has told his lawyer that he was subjected to similar treatment in the “tiger chair” while detained in Shandong’s Yantai city.

Xu, who has already served jail time for launching the New Citizens’ Movement for greater official accountability, was detained in early 2020 and held on suspicion of “subversion of state power” alongside Ding and other activists who held a dinner gathering in the southeastern port city of Xiamen on Dec. 13, 2019.

Both men were held incommunicado, denied permission to meet with either family members or a lawyer for two years, under “residential surveillance at a designated location” (RSDL) and criminal detention.

They haven’t been seen or heard from since their indictments in August 2021.

Activists and rights lawyers say Xu has never advocated violence, and has paid a very heavy price for advocating for his personal ideals.

They say the charges against those who attended the Xiamen dinner are a form of political persecution by the ruling Chinese Communist Party (CCP).

Translated and edited by Luisetta Mudie.