September 19, 2022       Comments Off on China must protect the rights of detained human rights defenders Huang Xueqin and Wang Jianbing 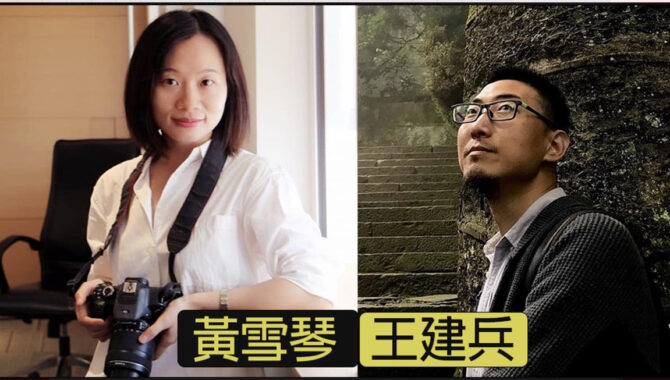 CHRD and a coalition of 24 human rights NGOs urge for the release of Chinese investigative journalist Huang Xueqin, and labor rights advocate Wang Jianbing, who was taken away by police exactly one year ago for allegedly ‘inciting subversion of state power’.

The open letter urging their release is below, in English and Chinese:

We, the undersigned civil society groups, call on Chinese authorities to respect and protect their rights in detention, including access to legal counsel, unfettered communication with family members, their right to health and their right to bodily autonomy. We emphasise that their detention is arbitrary, and we call for their release and for authorities to allow them to carry out their work and make important contributions to social justice.

Who are they ?
In the 2010s, Huang Xueqin worked as a journalist for mainstream media in China. During that time, she covered stories on public interest matters, women’s rights, corruption scandals, industrial pollution, and issues faced by socially-marginalized groups. She later supported victims and survivors of sexual harassment and gender-based violence who spoke out as part of the #MeToo movement in China. On 17 October 2019, she was stopped by police in Guangzhou and criminally detained in RSDL for three months – for posting online an article about Hong Kong’s anti-extradition movement.

Wang Jianbing followed a different path, but his story – like Huang’s – demonstrates the commitment of young people in China to giving back to their communities. He worked in the non-profit sector for more than 16 years, on issues ranging from education to disability to youth to labour. Since 2018, he has supported victims of occupational disease to increase their visibility and to access social services and legal aid.

On 19 September 2021, the two human rights defenders were taken by Guangzhou police; after 37 days, they were formally arrested on charges of ‘inciting subversion of state power’. Using COVID-19 prevention measures as an excuse, they were held for five months in solitary confinement, and subject to secret interrogation, in conditions similar to those of ‘residential surveillance in a designated location’, or RSDL. After months of delays and no due process guarantees, their case was transferred to court for the first time in early August 2022.

We strongly condemn the lengthy detentions of Huang and Wang. In a Communication sent to the Chinese government in February 2022, six UN independent experts – including the Special Rapporteur on human rights defenders and the Working Group on arbitrary detention (WGAD) – raised serious concerns about Wang’s disappearance and deprivation of liberty. They asserted that Wang’s activities were protected and legal, and that Chinese authorities used a broad definition of ‘endangering national security’ that runs counter to international human rights law.

In May 2022, the WGAD went one step further, formally declaring Wang’s detention to be ‘arbitrary’ and urging authorities to ensure his immediate release and access to remedy. Noting other, similar Chinese cases, the WGAD also requested Chinese authorities to undertake a comprehensive independent investigation into the case, taking measures to hold those responsible for rights violations accountable.

We echo their call: Chinese authorities should respect this UN finding, and immediately release Huang Xueqin and Wang Jianbing.

Risks of torture and poor health

In addition to the lack of legal grounds for their detention, we are also worried about conditions of detention for Wang and Huang. Using ‘COVID-19 isolation’ as an excuse, Wang was held incommunicado, during which he was subject to physical and mental violence and abuse. His physical health deteriorated, in part due to an irregular diet and inadequate nutrition, while he also suffered physical and mental torment and depression. UN and legal experts have found similar risks, possibly amounting to torture and cruel, inhumane or degrading treatment, in other Chinese detention practices – including RSDL. According to the United Nations Standard Minimum Rules for the Treatment of Prisoners (the ‘Mandela Rules’), prolonged solitary confinement – solitary confinement lasting more than 15 days – should be prohibited as it may constitute torture or ill-treatment.

Even more concerning are detention conditions for Huang Xueqin, because during the year she has been deprived of her liberty – again, without formal access to a lawyer or communication with her family – no one, including a legal counsel of her choosing, has received formal notification of her situation. We are deeply worried about her physical and mental health, and reiterate that incommunicado detention is a grave violation of international law.

Given the circumstances, many brave Chinese lawyers may have stepped up to defend Huang Xueqin. But we are alarmed that Huang has been prevented from appointing a lawyer of her choice. In March 2022, her family stepped in, appointing a lawyer on her behalf; she was not allowed to meet her client or see the case file. Nonetheless, that lawyer was dismissed – according to authorities, with Huang’s approval – after just two weeks. The right to legal counsel of one’s choosing is not only a core international human rights standard, but a right guaranteed by the Criminal Law of the PRC.

As is too often the case in China, the authorities’ ‘investigation’ into Huang’s and Wang’s case has had concrete impacts on civil society writ large. Around 70 friends and acquaintances of the two defenders, from across the country, have been summoned by the Guangzhou police and/or local authorities. Many of them were interrogated for up to 24 hours – some for several times – and forced to turn over their electronic devices. The police also coerced and threatened some individuals to sign false statements admitting that they had participated in training activities that had the intention of ‘subverting state power’ and that simple social gatherings were in fact political events to encourage criticism of the government. The Chinese government has been repeatedly warned by UN experts that the introduction of evidence stemming from forced or coerced confessions is a violation of international law and that officials engaged in this practice must be sanctioned.

A call for action

One year on, we call on the Chinese authorities to respect human rights standards, and uphold their international obligations, in the cases of Huang Xueqin and Wang Jianbing. Until Chinese authorities implement UN recommendations and Huang and Wang are released, the relevant officials should:

●  Ensure that Huang and Wang can freely access legal counsel of their own choosing, and protect the rights of lawyers to defend their clients.

●  Remove all barriers to free communication between Huang and Wang and their families and friends, whether in writing or over telephone.

●  Provide comprehensive physical and mental health services to Huang and Wang, including consensual examinations by an independent medical professional, and share the findings with lawyers and family members, or others on request.

●  Guarantee that Huang and Wang are not subjected to solitary confinement or other forms of torture or cruel, inhumane and degrading treatment, and that the conditions of their detention comply with international human rights standards.

●  Cease actions that aim to intimidate and silence members of civil society from engaging in advocacy for the protection of rights, and ensure that no evidence from coerced confessions is permissible in Huang’s and Wang’s – or anyone else’s – court proceedings.

权利实践 The Rights Practice
维吾尔人权项目 Uyghur Human Rights Project 世界反酷刑组织，在保护人权捍卫者观察组织的框架内 World Organisation Against Torture (OMCT), in the framework of the Observatory for the Protection of Human Rights Defenders