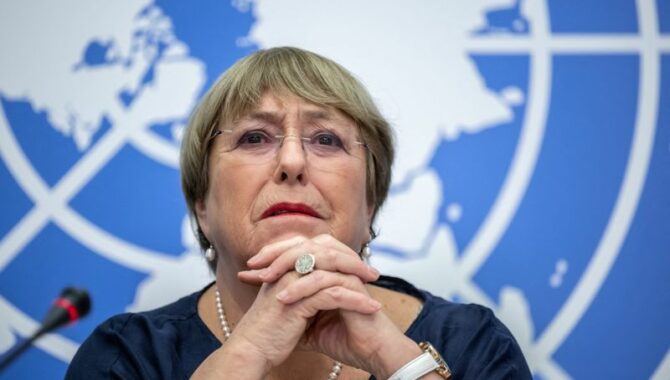 Originally published by Bloomberg on Sep 1, 2022

UN High Commissioner for Human Rights Michelle Bachelet delivered her long-awaited report Wednesday, just hours before her tenure expired, after months of delays. The assessment found “patterns of torture or other forms of cruel, inhuman or degrading treatment or punishment” as part of a campaign that China has defended as an effort to fight extremism.

Detentions of Uyghurs and other Muslims, along with a broader campaign of rights violations “may constitute international crimes, in particular crimes against humanity,” Bachelet said. Local holy places such as the Imam Asim Shrine in southern Xinjiang had been demolished, she added.

The UN assessment affirms findings by several Western governments and independent rights groups, although it stopped short of accusing China of genocide. The Trump administration designated China’s crackdown on Uyghurs and other minorities in the Xinjiang region as genocide in one of its final acts, a finding later affirmed by the Biden administration.

“The report gives credence to the widespread deprivation of liberty in re-education centers, the torture and sexual violence found there, the likelihood of forced labor, the assault on religious and cultural rights,” said William Nee, research and advocacy coordinator at Chinese Human Rights Defenders.

Beijing has dismissed allegations of rights abuses in the region as the “lie of the century,” and conducted tours for international diplomats that emphasized the Alaska-sized region’s political stability and economic transformation. China said in a response published with the report that the assessment ignores its achievements, exceeds Bachelet’s mandate and “wantonly smears and slanders China.”

“The Chinese government, pursuing a people-centered approach, upholds that living a happy life is the primary human right and has embarked on a human rights development path which conforms to the trend of the times,” it said.

Foreign Ministry spokesman Wang Wenbin called the report “illegal, null and void” during a regular press briefing Thursday in Beijing. He said the US and other nations “orchestrated and produced” the assessment.

Bachelet in May became the first UN human rights chief since 2005 to visit China, in a trip that rights groups criticized as overly controlled by Beijing. The former Chilean president later acknowledged she had faced “limitations” and wasn’t able to meet detained Uyghurs.

Last week, Bachelet vowed to press ahead with the report’s publication before her tenure ended.

The UN report will likely rekindle scrutiny of China’s policies in Xinjiang region and spur further efforts by governments, activists and international businesses to push for a change. It comes two weeks after a UN slavery expert found claims of forced labor in Xinjiang to be “reasonable.”

“For Beijing, this report is a major problem,” said Adrian Zenz, a senior fellow in China studies at the Victims of Communism Memorial Foundation and a leading critic of the policies in Xinjiang. “Despite some shortcomings, it speaks very strongly to the multiple aspects of this atrocity and strongly concludes that human rights violations have taken place.”

Germany’s Foreign Office said in a statement that the report showed “there is cause for greatest concern.” It also urged “the Chinese government to immediately grant all people of Xinjiang their full human rights.”

While the report focused on religious curbs and arbitrary detention in re-education centers, it said less about issues such as forced labor and coercive birth-control measures, Zenz said. Still, the mention of labor programs was significant at a time when the European Union was considering moves to ban products from Xinjiang, Zenz said, something the US’s Uyghur Forced Labor Prevention Act did in June.

The UN document recommended that the global business community take “all possible measures” to protect workers in the region and urged China to grant UN agencies and officials “unrestricted” visits. It also said the Chinese government should promptly release “all individuals arbitrarily deprived of their liberty” in Xinjiang, and put families in contact with those held.

Jewher Ilham, the daughter of jailed Uyghur scholar Ilham Tohti, said the assessment brought her “a little comfort.” “I was pleased to see that the report calls on the government of China to release detained individuals and to provide safe channels of communication and travel enabling families to reunite,” said Ilham, who is forced labor project coordinator at the Worker Rights Consortium.

A group of 60 Uyghur organizations called for an immediate response to the report to put an end to atrocities.

“This UN report is extremely important. It paves the way for meaningful and tangible action by member states, UN bodies, and the business community,” said World Uyghur Congress President Dolkun Isa, one of the groups signing the statement. “Accountability starts now.”