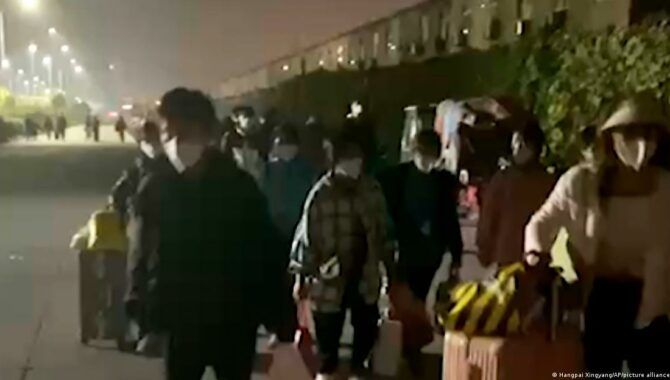 An exodus of workers from the world’s largest iPhone factory has drawn new attention to China’s draconian COVID policy and should be a “red flag” for Apple on the state of labor rights in the country, activists say.

Over the weekend, thousands of Foxconn factory workers in the central Chinese city of Zhengzhou were filmed escaping the complex, which has been locked down for weeks due to a COVID outbreak.

Footage posted on social media showed droves of workers climbing fences with their belongings, sitting in the back of trucks, or walking along a road into the countryside. Cities in the region are now preparing for an influx of people escaping from the factory.

As one of the biggest suppliers of Apple’s iPhone, Taiwan-based Foxconn employs around 200,000 workers in Zhengzhou.

The factory manufactures close to half of the world’s iPhones. The company did not specify the exact number of infected workers or the number of workers that have fled for home.

However, since Zhengzhou went into lockdown in recent weeks, the company has isolated workers more and more. Dining had been banned in the factory cafeteria, with workers required to eat meals in their dormitories.

Despite lockdown, iPhone production must go on

With the pressure of meeting the demand from Apple before the holiday season, Foxconn continued to run its production line under a “closed-loop” system, with workers required to live in the factory complex during an active coronavirus outbreak.

However, as the virus spreads within the factory, workers have been subject to further internal lockdowns.

“Those who are isolated or infected won’t be paid during the isolation, which has caused great financial losses to them,” said Li Qiang, the executive director of China Labor Watch (CLW), a labor rights watchdog based in New York.

“When a lot of people are showing symptoms, some workers may not want to work because if they come in contact with someone who has tested positive, they will be isolated and can’t keep doing the job,” he told DW.

According to Li, workers have also complained about not having enough food to eat and lacking basic supplies while in isolation.

“The way Foxconn tests workers is that they will test 20 workers together and those tested positive need to isolate at an unfinished building, with nothing other than a quilt inside,” he said. “There’s not even something to eat.”

Workers who live outside the factory have been more fortunate. Liu, a Foxconn worker in her 30s, rents accommodation nearby and was able to drive home without problems on Monday.

“I was only there for a short-term gig, but I won’t return to Foxconn even after the outbreak is contained,” she told DW. “The thought of being trapped in a factory for an uncertain period of time freaks me out.”

After the incident attracted widespread international attention, Li from China Labor Watch said that Foxconn relaxed some of the strict measures and put more resources into containing the outbreak.

In an interview with local media outlets in China’s Henan province, a Foxconn executive said the factory resumed serving food at the canteen on October 29. Additionally, workers who show up at work and meet the pandemic-prevention criteria are given a daily bonus.

Foxconn has also said it is not stopping workers from leaving the factory.

“For some employees who want to return home, the [plant] is cooperating with the government to organize personnel and vehicles to provide a point-to-point orderly return service for employees from today,” Foxconn said in a public statement on October 30.

So far, Apple, whose release of the new iPhone 14 relies heavily on the Foxconn factory in Zhengzhou, has not commented on the incident.

William Nee, the research and advocacy coordinator at China Human Rights Defender (CHRD), told DW that international corporations must respect human rights in their operations, regardless of China’s willingness to respect and protect those rights.

“This incident should be a red flag to Apple that they need to be conducting extra human rights due diligence to make sure that they are taking account of any human rights abuses that may be taking place,” he added

Nee remains pessimistic about the prospects for workers in China as President Xi Jinping begins his third term in power.

The incident “shows that Xi Jinping is enacting policies that he thinks will benefit China and its marginalized groups, but in fact, these policies are impacting those groups the most,” Nee said.

“Migrant workers have had a very difficult time with the zero-Covid policies, and that’s why so many people are trying to return to their hometowns. They have no mechanism for expressing their collective grievances and there is no ability to protest safely. It can be very difficult for marginalized groups under Xi,” he added.

Yaqiu Wang, senior China researcher at Human Rights Watch (HRW), said that the Chinese government’s control of information also contributed to the exodus of Foxconn workers from the factory.

“Chinese authorities’ strict control of information creates the false impression among the workers that if they were infected with coronavirus, the consequences would be severe, and that thought plants a sense of fear in many of their minds,” Wang said.

“Since the goal for the factory is to make money, the management doesn’t care about workers’ access to medical care or access to food. On the one hand, they want to make money and on the other, they must comply with the government’s pandemic control measures. That makes the workers the ultimate victim,” she told DW.

Teng Biao, a Chinese legal scholar based in the US, said the Chinese government’s ongoing imposition of the zero-Covid strategy has affected almost everyone in the country, especially those relying on gig work to earn a living.

“Some people have lost their income and source of livelihood, and have no money to buy enough food to sustain themselves, while many others have been put under mandatory isolation,” he told DW.

“For a large enterprise like Foxconn, they have to choose between economic interests and the basic rights of its employees,” he added.

“In China’s political and business environment, they most likely will have to prioritize sacrificing the interests of their employees. When the interests and benefits of a company are in conflict with the authorities’ political demands, companies have very little freedom to choose,” he said.