May 15, 2012       Comments Off on Chen Guangcheng: A Special Bulletin – Updates on Situation of Chen Guangcheng & His Family Members, Relatives & Supporters Since Chen’s Flight for Freedom 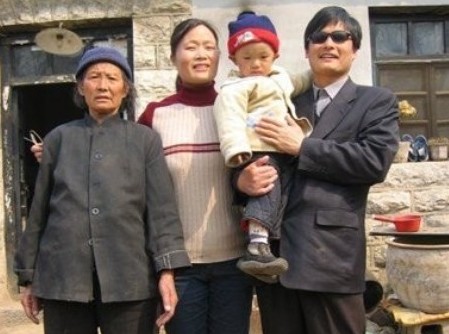 Chen Guangcheng (陈光诚), a rural “barefoot lawyer” and activist from Linyi City, Shandong Province, escaped from illegal house arrest in Dongshigu Village on April 20, 2012. He was driven to Beijing and protected by activists and, after being hidden in several locations in the capital, eventually found safe refuge at the US Embassy, where he stayed for six days. In a video posted online on April 27 (English transcript here), Chen Guangcheng confirmed his escape, detailed the horrific treatment that he and his family have endured, and made demands to Premier Wen Jiabao to authorize investigations into the corruption and criminal acts committed by Linyi officials and to protect his wife, mother, and child.

By May 2, 2012, US and Chinese officials had reportedly brokered a deal whereby Chinese authorities would “guarantee” the safety of Chen and his wife Yuan Weijing (袁伟静) and two children, and would allow Chen to study at a university in China. However, when supporters of Chen spoke with him by phone as he was recuperating and being treated at Chaoyang Hospital (besides dealing with an illness, Chen had also broken his foot during his escape), Chen reportedly disclosed that he received word of a threat from Chinese officials for him to leave the US Embassy or else his wife and children, who had been brought to Beijing, would be sent back to Linyi. At Chaoyang Hospital, Chen’s wife indicated to her husband that she was physically assaulted at their home after his escape, and that Linyi authorities had threatened her with further physical violence if Chen did not leave the embassy compound.

Facing these serious circumstances, Chen and his wife expressed a desire to leave China in order to protect themselves, instead of remaining in the country under the conditions promised by Chinese officials. By May 4, 2012, a new agreement had been struck that would allow Chen, his wife, and their two children to go to the United States, where Chen would have the opportunity to study law. In the days just before and since the new arrangements emerged, Chen’s contact with US officials and his supporters was limited, with Chaoyang Hospital surrounded by police and phone calls to Chen abruptly cut off. And once local authorities learned of Chen’s escape, they retaliated by detaining several members of his family, and many of Chen’s supporters and others with a connection to his family’s plight have continued to face various forms of harassment and rights violations as a result of Chen’s case.

On May 19, 2012, authorities informed Chen Guangcheng to quickly pack his belongings since he and his wife and two children would be going to the Beijing Capital International Airport to depart for the United States that same day. Once at the airport, Chen and his family members were given the necessary travel documents and boarded a plane bound for Newark, New Jersey, and arrived on US soil in the late afternoon of May 19, 2012.

CHRD has confirmed these acts by authorities in the aftermath of Chen Guangcheng’s escape from house arrest, from the ensuing period when Chen was in the US Embassy and then Chaoyang Hospital and since his relocation to the United States:

Chen Guangcheng has campaigned for the rights of villagers and the disabled, providing free legal consultation to these groups, and is best known for his work on behalf of victims of forced sterilization and abortions as part of government efforts to implement birth quotas in Linyi City. See more information here about Chen’s human rights advocacy efforts as well as details about his past trial, sentencing, and house arrest.

Learn more below about CHRD’s research and advocacy work related to Chen Guangcheng.

“Let there be light, let there be sincerity: the illegal house arrest of Chen Guangcheng and the unprecedented grassroots campaign to end it” (November 11, 2011)

“I Don’t Have a Choice over My Own Body: Abuses Continue in China’s Family Planning Policy” (December 21, 2010)

Submission to UN on Chen Guangcheng: Communication Alleging Arbitrary Arrest and Detention of Chen Guangcheng, a human rights defender and citizen of the People’s Republic of China (June 21, 2006)