Rule of law? Not in China. Legal reform hasn’t helped activists such as Chen Guangcheng. 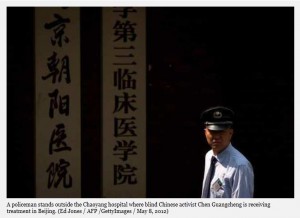 The “deal” for Chinese activist Chen Guangcheng to leave China for legal study in the United States is not without pitfalls, but other outcomes could be worse. Even if Chinese authorities honor the promises apparently made to U.S. officials to let him travel, they have conceded little on human rights. One thing is clear: Whether Chen stays or goes, his story is emblematic of the failure of legal reform in China today.

Chen’s hope is to study law and live in peace with his children and wife, Yuan Weijing, an English teacher and activist who helps her husband, who is blind, with reading and writing. They have no choice but to accompany him, given that China commonly retaliates against family members to break the spirit of dissidents — and to set an example. Family members of Gao Zhisheng, a lawyer imprisoned in Xinjiang province, had suffered years of persecution before they fled the country. Liu Xia, the wife of jailed Nobel Peace Prize laureate Liu Xiaobo, has been under house arrest in Beijing since 2010.

Chen’s family had suffered years of persecution, and, as Chen learned after leavingthe U.S. Embassyand arriving at a Beijing hospital, police had detained relatives, surrounded their village, entered their home and set up cameras and an electric fence. Authorities reportedly tied Yuan to a chair for two days and threatened to kill her if Chen didn’t leave the embassy. In view of this, Chen’s reversal of his earlier decision to stay in China is based on real and reasonable fear for his family’s safety.

Chen would far prefer to remain in China, if he could work and live there safely with his family. Once he leaves China, if he tries to return later, it is very likely that authorities will deny him entry. China is known to treat dissidents as bargaining chips, as happened with Wei Jingsheng, Xu Wenli and Wang Dan, high-profile critics who were forced into exile. And the government has denied the right of “troublemakers” to return to their homeland, a practice that applies to thousands of exiled dissidents, most of whom left after the 1989 Tiananmen massacre.

Ultimately, armed with a legal education in the U.S. and with the legend of his battling to help the disadvantaged and outsmarting a vast security apparatus, Chen could pose an even greater threat in the eyes of the Chinese Communist Party.

But going abroad for study rather than seeking political asylum allows Chen to keep the door open, in theory at least, for his return. If barred from returning, Chen could join those exiles who promote rule of law in China from overseas. But he would no longer be doing what he prefers to do: provide legal services to the less privileged in Chinese society and inspire others to use the law to better their lives. The latter is what the Chinese Communist Party also claims to do.

For trying to do just that, Chen has long been treated as a dangerous criminal. After four years in prison on trumped-up charges of “blocking traffic,” he was released in 2010 into house arrest, where he remained until his escape in April. In his career as a “barefoot lawyer,” Chen successfully organized villagers fighting a polluting paper mill and provided legal advice to the disabled fighting unfair taxes. Chen’s exposure of forced abortions and sterilizations in his hometown represented what may have been the first known domestic challenge toChina’sone-child policy.

This challenge meant that Chen had crossed an invisible line and unnerved the government.

Chen’s suffering and the severe punishment of his fellow activists and lawyers for using legal tools made available in today’s China — concerted efforts that became known as weiquan, a civil rights movement — serve as a sad commentary on the country’s much-trumpeted progress in rule-of-law reform.

The promised U.S.-Chinese “collaboration” to facilitate Chen’s departure (assuming it materializes) indicates little progress on human rights. The “deal” includes no provisions that abusive authorities will lose the total immunity they enjoy from any criminal investigation for tormenting Chen and his family and harassing supporters. Beijing made no commitment to release Chen’s nephew, detained for resisting intruders in his house, or to refrain from further retaliation against supporters. Jiang Tianyong, a Beijing lawyer, was detained after he attempted to visit Chen last week and beaten so severely that his left eardrum appears to have been ruptured. There is no sign that similar persecution against other activists in the country would subside after the Chen incident. Chen’s confinement in the Beijing hospital looks eerily like de facto house arrest outside his home.

The political reality in China is such that this bleak picture is not surprising. Since the Arab Spring uprisings toppled rulers across the Middle East, Beijing has become more wary that a spark will ignite a popular revolt in China. Chen could very well be such a spark. The Chinese government is doing all it can to prevent a fire from catching on.

Renee Xia is international director of the Network of Chinese Human Rights Defenders, which documents human rights abuses in China.

The above piece, by CHRD’s International Director Renee Xia, originally appeared on the website of  Los Angeles Times on May 10, 2012. It is available there at http://www.latimes.com/news/opinion/commentary/la-oe-xia-chen-china-rule-of-law-20120510,0,7712396.story