Tiananmen Massacre: Citizens Continue to Press for Truth and Justice Despite Suppression

June 1, 2012       Comments Off on Tiananmen Massacre: Citizens Continue to Press for Truth and Justice Despite Suppression

(Chinese Human Rights Defenders, June 1, 2012) – For more than two decades, the Chinese government has pursued a policy of denial and silence regarding the 1989 Tiananmen Massacre: discussion of the massacre is systematically censored in print and on the internet, and there has been neither an investigation nor an apology. Yet, many Chinese have refused to forget the tragedy despite the government’s continuing suppression of efforts, including by victims’ families, to seek truth and accountability.

“The Chinese government’s web of lies and altered history about Tiananmen will ultimately collapse in the age of the internet and our interconnected world,” said Renee Xia, international director of CHRD. “The government is only deluding itself in counting on history to forget about the blood on the hands of those culpable leaders.”

Twenty-three years ago, on June 3 and 4, 1989, the People’s Liberation Army, following orders from top leaders, opened fire on peaceful pro-democracy demonstrators in Beijing. Hundreds or even thousands of people were killed and many more injured. Thousands of people were subsequently put in prison, where a handful still remain, in addition to dozens of people who were sentenced to death and executed.

Since then, around June 4 each year, some Chinese — at great personal risk– commemorate the tragedy, voicing demands for an investigation and reversal of the government’s “verdict” of the suppressed pro-democracy protests as a “counterrevolutionary riot.” As in previous years, the Tiananmen Mothers, a loose group of some of the families and supporters of those who were killed in 1989, have called again for an official reversal of the “counterrevolution” verdict, an independent investigation into the actions of the government in the massacre, compensation for families of the victims, and punishment in accordance with the law for those responsible for the massacre. China’s leaders have consistently ignored these demands, instead persecuting and threatening the main organizers of Tiananmen Mothers over the past two decades. 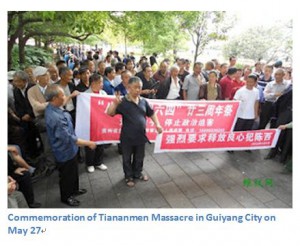 Also this week, Twitter and the domestic microblogging service weibo have been abuzz with messages commemorating Tiananmen, keeping censors busy deleting or blocking 1989-related postings.  And several public events have taken place in Chinese cities to mark the tragedy and break the silence. On May 27, for example, dozens of dissidents in Guizhou Province demonstrated at a city square in the provincial capital Guiyang to commemorate June 4. On May 30 and 31, police officers took away four activists involved in organizing the demonstration, Mi Chongbiao (糜崇骠), Yong Zhiming (雍志明), Mo Jiangang (莫建刚), and Tian Zuxiang (田祖湘), as well as Mi’s wife, Li Kezhen (李克珍). Police also searched the homes of Mi and Yong and confiscated their computers. Two other members of the Guizhou Human Rights Forum, Liao Shuangyuan (廖双元) and Wu Yuqin (吴玉琴), cannot be reached by their friends. On May 30, Fujian activist Fan Yanqiong (范燕琼) led petitioners on a procession toward a local courthouse, where they unfurled banners demanding that the government rectify its claim that the 1989 movement was a “counterrevolutionary riot” and expressing support for Premier Wen Jiabao’s calls for political reform. Police followed Fan home, surrounded her building, and demanded entry into her apartment. They repeatedly pounded on her door and accused her of committing “illegal criminal acts.”

After decades of frustration and despair, Ya Weilin (轧伟林), a 73-year-old member of the Tiananmen Mothers group whose son was killed during the massacre, in the ultimate protest against the government’s heartless silence, took his own life last week. 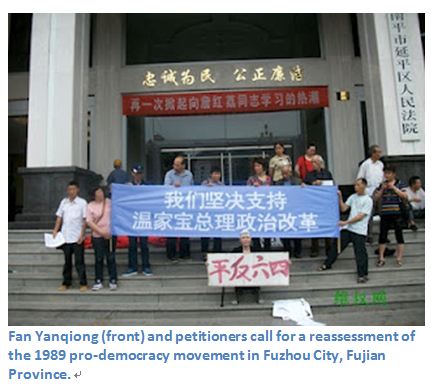 Many 1989 generation activists and student participants in the Tiananmen pro-democracy movement have carried on their advocacy through their writings or online posts, or assisting victims of rights abuses, or providing legal assistance to victims.  Some of them have faced further retaliation by the Chinese government. For example,  Chen Wei (陈卫) and Liu Xianbin (刘贤斌) from Sichuan Province, Chen Xi (陈西) from Guizhou Province, and Liu Xiaobo (刘晓波) of Beijing are just some of the 1989 leaders currently imprisoned after they had served jail time for their roles in the 1989 protests. These four activists were given especially harsh sentences (Chen Wei received nine years, Liu Xianbin and Chen Xi, 10 years each, and Liu Xiaobo was given 11 years for “inciting subversion of state power”) in part because, according to the official verdicts, they are “recidivists”: they have continued to voice yearnings for democracy and failed to “reform” despite having been incarcerated after the 1989 massacre.

Over the years, the Chinese government has ignored persistent international calls for justice and accountability for the victims of the Tiananmen Massacre, though such calls have also become more muted as China rises as an economic power. In 2008, for example, after reviewing the Chinese government’s report on its compliance with the UN Convention against Torture, the UN Committee against Torture requested that Chinese officials:
“conduct a full and impartial investigation into the suppression of the Democracy movement in Beijing in June 1989, provide information on the persons who are still detained from that period, inform the family members of their findings, offer apologies and reparation as appropriate and prosecute those found responsible for excessive use of force, torture and other ill-treatment.”[1]
In its response to the Committee’s report, the Chinese  government accused the Committee’s rapporteurs for China o of making “groundless accusations against the Government of China,” including “vilify[ing] China with fabrications such as ‘suppression’ of the so-called ‘1989 Democracy Movement.’”
“The Chinese government’s culture of impunity surrounding the Tiananmen Massacre encourages ongoing human rights abuses,” said Renee Xia. “In order for bilateral dialogues about China’s current rights record to remain relevant, such as the upcoming US-China human rights dialogue, they must include a discussion about accountability for the bloody crackdown in 1989.”
Media Contacts