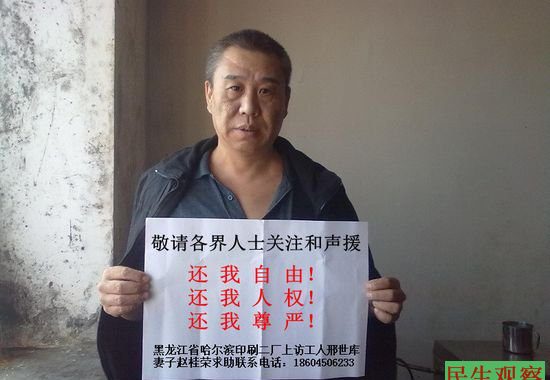 on behalf of Xing Shiku, citizen of the People’s Republic of China

Alleging Arbitrary Detention, Torture and Other Cruel, Inhuman or Degrading Treatment or Punishment

6. Identity document (if any):

7. Profession and/or activity (if believed to be relevant to the arrest/detention): Worker and petitioner who has filed grievances with the local government about corruption and problems related to the privatization of the state-owned company where he formerly worked

3. Forces who carried out the arrest or are believed to have carried it out: Heads of the Office for Letters and Visits in Daowai District Government, Harbin City, Heilongjiang Province and police led by the office heads

4. Did they show a warrant or other decision by a public authority? No

2. Duration of detention: From March 16, 2007 through the present (i.e. his detention is ongoing, which has been six years)

3. Forces holding the detainee under custody: Daowai District Psychiatric Hospital, acting on orders from the district’s Office for Letters and Visits

IV. Describe the circumstances of the arrest and/or the detention and indicate precise reasons why you consider the arrest or detention to be arbitrary

Mr. Xing Shiku (邢世库), a petitioner from Heilongjiang Province, has been forcibly held for over six years in a psychiatric hospital in retaliation for filing complaints to government authorities about corruption and problems related to the privatization of the state-owned company where he once worked. In February 2007, Mr. Xing was seized in Beijing and taken back to Harbin City, and ever since has been detained in the Daowai District Psychiatric Hospital. Authorities who have ordered his detention have demanded that he stop petitioning, which he has refused to do. The hospital has reportedly not administered any psychiatric treatments to him, and doctors there have said that he does not suffer from any psychiatric disorder.

Mr. Xing’s wife, Zhao Guirong (赵桂荣), complained in the past to higher authorities about Xing’s detention and attracted the attention of the State Bureau for Letters and Visits in Beijing, which led to the psychiatric hospital’s decision to release Xing on March 16, 2007. However, on that very same day, the director of the Daowai District Government’s Office for Letters and Visits led a group of thugs and forcedly seized Xing and sent him back to the hospital, where Xing has been detained ever since. In order to keep him held against his will, hospital authorities have claimed that only local officials, who have committed him to the institution and assumed guardianship rights, can order his release.

As the Working Group noted in its Deliberation No. 7 on Issues related to Psychiatric Detention: “[T]he detention is manifestly arbitrary if a person is deprived of his liberty on the pretext of his (alleged) mental disability, but it is obvious that he is detained on account of his political, ideological, or religious views, opinion, conviction or activity.” The Working Group further explained that “psychiatric detention shall not be used to jeopardize someone’s freedom of expression . . .”

In addition, under the Working Group’s criteria for determining when a deprivation of liberty is arbitrary, the circumstances of Mr. Xing’s detention satisfy both Category II (i.e., when the deprivation of liberty results from the exercise of the rights or freedoms guaranteed by articles 7, 13, 14, 18, 19, 20, and 21 of the Universal Declaration of Human Rights (UDHR)) and Category III (i.e., when the total or partial non-observance of the international norms relating to the right to a fair trial, spelled out in the UDHR and in the relevant international instruments accepted by the States concerned, is of such gravity as to give the deprivation of liberty an arbitrary character).

V. Indicate internal steps, including domestic remedies, taken especially with the legal and administrative authorities, particularly for the purpose of establishing the detention and, as appropriate, their results or the reasons why such steps or remedies were ineffective or why they were not taken.

Mr. Xing’s wife has sent letters to departments of the central government, and these letters were also published online. Xing Shiku and his wife have also granted interviews relating their experience. These interviews and narratives have been published online. Up to today, there has been no official investigation of Xing’s detention. 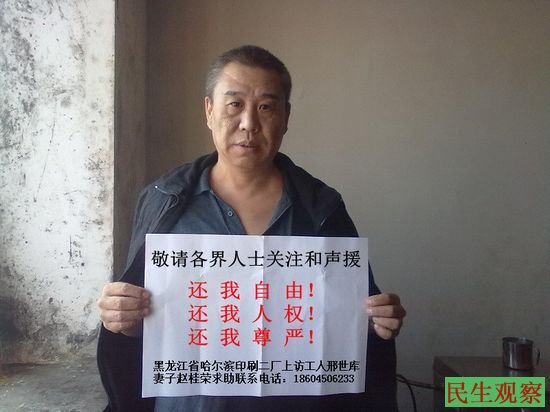 In this photo of Xing Shiku, the sign he is holding reads, “Give back my freedom, human rights, and dignity,” and includes his appeal for help and his contact information.

Background and additional information relating to previous arbitrary detentions as well as violation of the rights to freedom of opinion and expression:

Mr. Xing has suffered cruel treatment while held in the psychiatric hospital. In a videotaped interview, he said he has been tied up in chains, and that hospital staff have struck his head with electric pricks. Xing has suffered problems in his legs and other illnesses due to the extended detention and abuses, and has not received proper medical care.

Since Mr. Xing’s wife went to Beijing to complain to higher authorities about the mistreatment of Xing in March 2007, she was put in “black jails”—makeshift, extralegal detention facilities—several times, and for a total of more than 300 days. She was also tortured. Unable to bear such mistreatment, she has reportedly attempted to commit suicide a number of times. In addition, the couple’s daughter was once blocked from attending school, in likely retaliation against her parents.

Opinion No. 8/2014 (China) on Mr Xing Shiku, in Opinions adopted by the Working Group on Arbitrary Detention at its sixty-ninth session, 22 April – 1 May 2014, UN Human Rights Council (English version)

Opinion No. 8/2014 (China) on Mr Xing Shiku, in Opinions adopted by the Working Group on Arbitrary Detention at its sixty-ninth session, 22 April – 1 May 2014, UN Human Rights Council (Chinese version)