Hunan activist Peng Lanlan (彭兰岚) has now been detained for one year after pushing for civil society participation in China’s Universal Periodic Review (UPR) by  demanding the government disclose information on the country’s second “National Human Rights Action Plan.” Peng has reportedly been very weak and had difficulty eating. In August 2012, Peng and other activists were seized in Beijing while en route to submitting an information disclosure application about the drafting process of China’s human rights action plan. Arrested last October on a charge of “obstructing official business,” Peng has been held at Dongcheng District Detention Center. Peng was reportedly tortured by police soon after being taken into custody. On June 8, 2013, the Dongcheng District People’s Court put Peng on trial in closed proceedings but has yet to hand down a verdict. Peng Lanlan is the only activist known to have been arrested in retaliation for seeking a role in China’s human rights action plans and upcoming UPR, preparations for which the government has declared “state secrets.”[1]

On August 1, five ethnic Tibetans in Sichuan Province, including a popular writer, were reportedly given prison terms ranging from two years to five-and-a-half years for allegedly being members of a secret political group. In Ganzi (Tibetan: Kardze) Tibetan Autonomous Prefecture, the Yajiang County People’s Court sentenced the writer Gangkye Drupa Kyab to five years and six months, while Samdup received a five-year term, Drensel was handed three years, and Sheygyal and Yudrang each were sentenced to two years, according to information obtained by an exile Tibetan newspaper. The men were all accused of being part of the so-called Anti-Communist Party Association. Gangkye Drupa Kyab was initially seized in February 2012 when police officers raided his home in Seda County, and he was then held incommunicado for 17 months. Also a teacher, his most well known book is “Blood Letters of 2008,” which details the violent response by Chinese authorities to the protests in Tibet in March 2008.[2]

Tibetan Monks Given 30 Months in Prison for “Harboring Criminals”

A court in the Tibetan Autonomous Region (TAR) sentenced three monks in April to two-and-half-years in prison on charges of “harboring criminals,” a case apparently related to fires and explosions that occurred around government buildings in October 2011. Two of the monks, Namsay Sonam (朗色索朗) and Lodroe Rabsel (洛珠绕色), were seized for allegedly protecting those who police claim were involved in the incident, which took place in Changdu (Tibetan: Chamdo) Prefecture in the TAR. Authorities accused a third monk, Dhondup Gyaltsen (顿珠江参), of writing “reactionary” slogans about Tibetan independence on materials sent to officials. Arrested in March 2012, the three monks were first charged with “splittism,” but the alleged crime was later changed. The monks, who were all administrative committee members at Karma Monastery, were tried by the Changdu Prefecture People’s Court, and are being held at Changdu County Prison.[3]

On August 6, at least four activists in Jiangsu Province were formally arrested on charges of “gathering a crowd to disrupt social order” in connection with a successful rescue in June of individuals who had been illegally held in a “black jail” in Wuxi City. The four activists—Ding Hongfen (丁红芬), Shen Guodong (沈果东), Yin Xijin (殷锡金)，and Qu Fengsheng (瞿峰盛)—were initially detained on June 22 and criminally detained on July 5 after they and 15 others freed five people, including three over 70 years old, who were being illegally held by police inside a hotel. Ms. Ding is being held at Wuxi City No. 2 Detention Center, the other three are at Wuxi City No. 1 Detention Center.

Of 12 others who were criminally detained in following the incident, most have been released, and some have said they were severely tortured.[4] All of those detained had also called for Chinese officials to disclose their financial wealth, a drive that has spurred Chinese authorities to detain dozens of citizens from around China since February. (See a list on CHRD’s website of individuals who have been criminally detained in the crackdown.)

Six of 19 petitioners from Fujian Province who were criminally detained in late June for trying to bring attention to their grievances in front of the U.S. Embassy in Beijing have been arrested on charges of “creating a disturbance.” On June 25, the group from Fuzhou City went to the embassy and threw flyers detailing the injustice that they have faced from Chinese authorities. Within minutes, police dragged the petitioners away and then criminally detained them. On August 6, the wife of Lin Bingxing (林炳兴) was informed that Lin’s arrest had been approved by the Chaoyang District People’s Procuratorate. Xiong Fenglian (熊凤莲), Hu Shuyuan (胡淑媛), Jiang Bixiu (蒋碧秀), Wu Fasheng (吴发胜), and Lin Yimei (林依妹) have also been arrested on the same charge. The 13 other petitioners had previously been released on bail.[5]

The whereabouts of Shenzhen-based activist Yang Mingyu (杨明玉) have been unknown since June 12, after he was taken away by Shenzhen police. National security officers in the capital initially took Yang into custody on June 3 in Beijing—the eve of the politically sensitive June Fourth anniversary—and then forcibly returned him to Shenzhen. Officers reportedly threatened Yang, saying that he could disappear by being “put into a bag and thrown to the bottom of the sea in the South, or buried in a pit dug in the desert in the North.” More than 100 people have signed an appeal calling for Shenzhen authorities to disclose Yang’s whereabouts. Yang, a migrant worker originally from Shandong Province, has petitioned for an unfair settlement after he was injured at a factory. In retaliation, Yang has been sent to prison and Re-education through Labor, given many administrative detentions, and held in “black jails” numerous times. In addition, he signed “Charter 08” and has been involve in many rights activities in Shenzhen.[6] 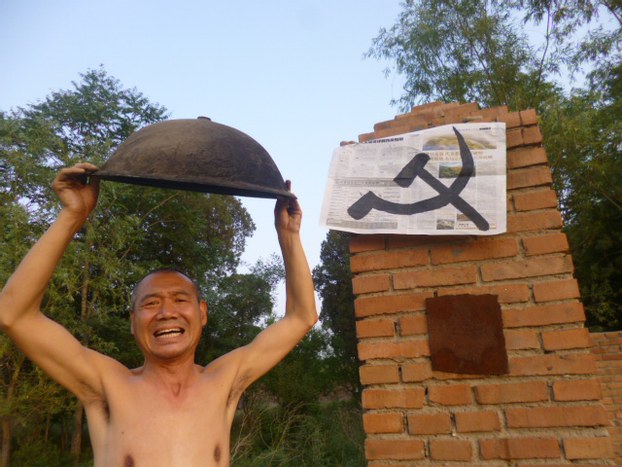 Uyghur Student Disappeared at Beijing Airport on Way to Turkey

Mutellip Imin (穆塔力浦·伊明), a 24-year-old Uyghur student, has been missing since being stopped by police at a security check point at the Beijing International Airport on July 15, according to Ulghurbiz, a website based in Beijing. Atikem Rozi, using the screen name “Uyghuray,” wrote on the site that Imin had sent her an “SOS” text message in the early morning of July 15. Since then, she has not been able to contact him, and Imin’s family also has received no notification from police about his whereabouts. On July 6, Imin returned to Beijing from Turkey, where he studies the Turkish language at Istanbul University. Before his return, he apparently had learned that one of his friends, a Uyghur student at People’s University in Beijing, had been invited to “drink tea” with national security officers and was interrogated for more than 20 hours, during which time officers repeatedly asked about Imin. Officers hinted that they would pursue him if he were to return to China. Imin had graduated from the Central University of National Minorities in Beijing in July 2012.[7]

Detained Jiangxi activist Liu Ping (刘萍) was physically assaulted the day she was taken into custody in April, and has endured other forms of mistreatment in detention, according to her lawyer, Zheng Jianwei (郑建伟). When the lawyer visited Liu at Xinyu City Detention Center on August 1, Liu told him that an officer tried to choke her, and that two others twisted her arms painfully on April 28. Authorities also have blocked Liu from accessing funds that supporters have sent to the detention center for her. She was even prevented from buying medicine to treat a severe bout of diarrhea. Liu was initially held for “inciting subversion of state power” and then arrested in early June on a charge of “unlawful assembly.” (See a list on CHRD’s website of individuals who have been criminally detained in the crackdown). She is among three activists from Jiangxi Province—along with Li Sihua (李思华) and Wei Zhongping (魏忠平)—whose trial had been reportedly scheduled for July 18 but then cancelled. No new trial date has been announced.[8]