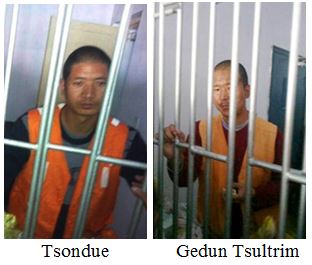 Tsondue and Gedun Tsultrim were among many Tibetan monks and lay people detained and interrogate shortly after a self-immolation protest on November 19, 2012. Tsondue was sentenced for being the chief chant-master during a prayer service held in honor of the self-immolation victim, Wangchen Norbu (旺青诺布). Gedun Tsultrim was charged with coordinating a group visit to the victim’s home to offer condolences and prayers. Both monks were sentenced  after five months of secret detention. On the day of trial, Tsondue and Gedun Tsultrim had no legal representation.

Tsondue, who is about 27 years old, and Gedun Tsultrim, around 30 years of age, are from Wendu (Tibetan: Beudo) Monastary in Qinghai Province. Both of them shouldered responsibility for their roles after police detained the monks and lay people at the prayer service. Family members were denied visitation and any information about their detention, and the only time Tsondue and Gedun Tsultrim were allowed to see visitors was after the sentencing hearing. Local authorities then transferred them to Xining City, capital of Qinghai, to serve a three-month incommunicado military training. The two monks are among several other Tibetans who have been imprisoned in line with the Chinese government’s adopted policy of criminalizing acts linked to self-immolations.

“Two monks sentenced to 3 yrs in prison for holding prayers for self-immolator,” June 5, 2013, Tibetan Centre for Human Rights and Defenders