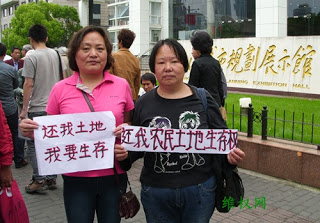 (Chinese Human Rights Defenders, September 17, 2013) – Authorities in China have stopped two activists from boarding their flights for a training on UN human rights mechanisms in Geneva, and one of them has since been disappeared after being taken away by security agents. These actions are further indication that the Chinese government seems to be on high alert as the UN Human Rights Council’s Universal Periodic Review (UPR) on China on October 22 rapidly approaches. International Service for Human Rights, a Geneva-based NGO, had invited the two to the training.

Cao Shunli (曹顺利), based in Beijing, has been missing since September 14, after she was taken aside by airport security agents and interrogated at the Beijing Capital International Airport. All efforts to contact her by her friends and fellow activists have failed. In addition, on the same day, airport security agents intercepted Shanghai activist Chen Jianfang (陈建芳) at Guangzhou Baiyun International Airport. Chen insisted that security agents produce legal documents for barring her from leaving the country, but they refused. Instead, they reportedly said to her: “Shanghai police told [us] to do this” and that “you are barred from traveling abroad for life.” One security officer reportedly told Chen that they would go so far as resort to “armed violence to handle” her if she tried to force her way past security, and another officer tore her plane tickets to pieces.[1]

In recent weeks, police in several Chinese cities have interrogated other activists and lawyers about the same training program and warned them about serious consequences. Authorities rejected two activists’ applications for passports and put one activist under criminal detention only days before his scheduled trip to Geneva.

In the past few years, Cao Shunli has persistently advocated for civil society participation at the national level in China’s preparation for UPR, particularly in the drafting of the national human rights reports. Cao has been detained several times since 2008 in retaliation for these efforts, as reprisals by authorities have involved consistent harassment of activists. In November 2012, a Ministry of Foreign Affairs (MFA) reply to Cao’s application for public disclosure of information about UPR officially stated that the process involved “state secrets.” Cao was also among dozens of citizens who filed a lawsuit against the MFA regarding the lack of transparency about UPR. A Beijing court refused to hear the suit, however, issuing a decision in August 2013 that reinforced authorities’ rejection of civil society participation in UPR.

In recent months, Cao and fellow activists in Beijing have been swept away by police as they peacefully held demonstrations in front of the MFA building demanding participation in UPR. Most recently, police cleared away activists on September 2—the third time this year that such a sit-in has been broken up at the same location. The first such demonstration began on June 18 and attracted up to 200 activists at one point, including some who filed the lawsuit, as participants waited for a government reply to requests to add their voice to China’s state report for UPR. At that time, police warned protesters to leave the scene before cleaning up the area on July 1 and temporarily taking dozens of protesters into custody.

Originally a farmer, Chen Jianfang and her family lost land to government-backed developers. As she petitioned the Shanghai government and central authorities in Beijing for compensation, she has been repeatedly detained in black jails and was sent to a Re-education through Labor camp in March 2010 for 15 months. Since her release, she has emerged as a leading voice in protests on land and housing rights, demanding protection of access to justice, the rights to free expression and peaceful demonstration. In recent months, she was among hundreds of activists in Shanghai who demonstrated to demand the release of activists detained for their call for top officials to disclose personal wealth, to urge the government to ratify the International Covenant on Civil and Political Rights, and to ask for information disclosure on the government’s claim that civil society had participated in the preparation of the national human rights report for UPR.

In an effort to promote advocacy related to the UPR, Shanghai activists, including Chen, publicly handed out copies on June 17, 2013, of the “UPR Recommendations” to China, which were made by other member States of the Human Rights Council during UPR in 2009. After reading the recommendations, some Shanghai residents reportedly expressed hope that more countries could make recommendations to the Chinese government in the upcoming UPR, including on the rights of disadvantaged groups and issues of forced demolition and land expropriation.

“Activists Out of Contact After Being Taken Away by Police,” China Human Rights Briefing November 9-16, 2012, CHRD

Related alerts and statements by CHRD:

“The Chinese Government Must End Reprisals Against Activists Demanding Participation in UPR,” July 4, 2013

Authorities in China have stopped two activists from boarding their flights for a training on UN human rights mechanisms in Geneva, and one of them has since been disappeared after being taken away by security agents. These actions are further indication that the Chinese government seems to be on high as the UN Human Rights Council’s Universal Periodic Review (UPR) on China on October 22 rapidly approaches. International Service for Human Rights, a Geneva-based NGO, had invited the two to the training.