Originally published by SCMP on October 25, 2013 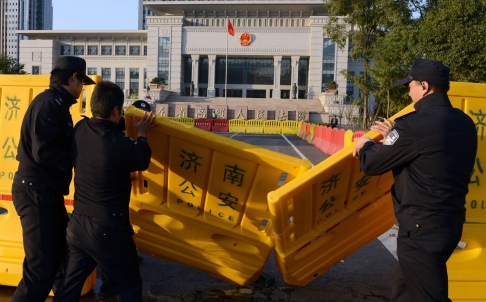 Politics
Wall Street Journal
Beijing’s new housing program will supply 20,000 “self-use” homes meant for the owner to live in, rather than to hold as an investment by the end of the year, another 50,000 next year.
China Human Rights Defenders
List of the more than 60 individuals who have allegedly engaged in politically sensitive activism and are known to have been detained this year since March.
China Post (Taiwan)
Taiwan’s military has reinstated an anti-Chinese intelligence workforce after a 12-year hiatus.
Phoenix TV via Southern Metropolis Daily*
It is “impossible” that Bo Xilai’s appeal today will succeed, accoring to Hong Daode, a law scholar at the China Univeristy of Political Science and Law.

Society
New Express*
The newspaper‘s publishing house issued a statement on Thursday calling for detained journalist Chen Yongzhou’s release.
New York Times – Sinosphere
An elderly Beijing woman would prefer that government revenue go to domestic needs, not to North Korea.
Radio Free Asia
Three Tibetans in Sichuan province have been jailed after being accused of preventing police from stopping a Tibetan from burning to death in protest against Chinese rule.
The Guardian
How London’s Chinatown is striking back at immigration “fishing” raids.

Economy
Financial Times
Foxconn cuts number of student interns.
Businessweek
Walmart China will add 110 stores in smaller cities and shutter as many as 30 underperforming outlets.
China Securities Daily*
The first land deal in the Shanghai Free Trade Zone was completed at a much higher than expected price.
Bloomberg
The stock price of Chinese mobile-security service provider NQ Mobile sank the most on record after Muddy Waters called the company a “massive fraud”.