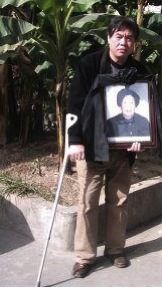 Shanghai police initially detained Wang Kouma on charges of “gathering a crowd to disturb order of a public place” but then convicted him of “creating a disturbance.” He was held for nearly a year before receiving a hearing, a prolonged period that violated China’s Criminal Procedure Law. Tried along with fellow activist Wei Qin (魏勤), police blocked dozens of supporters from attending their trial. Wang Kouma was convicted of organizing a memorial service in his late mother’s honor in January 2012. Wang’s mother, Teng Jindi (滕金娣), who petitioned for land rights, died mysteriously in a black jail in 2008, and he has since sought accountability from local authorities who he believes are responsible for her death. Wang previously served a two-year sentence for his activism.