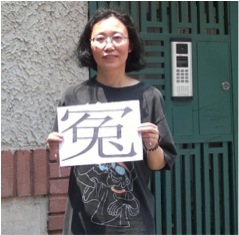 Shanghai-based activist Wei Qin was seized along with activist Wang Kouma (王扣玛) in September 2012 on charges of “gathering a crowd to disturb order of a public place.” She was detained for nearly a year before being convicted of a different crime, for which she was sentenced to 2 years and 3 months in prison. According to the verdict, Wei Qin was found guilty of participating in a memorial service in January 2012 for the mother of Wang Kouma, who had died mysteriously in a “black jail.”

Wei Qin, born in 1965, has been petitioning since 2004 after she was laid-off without cause and her home was forcibly demolished. Wei has also helped other people with petitioning over their grievances. In reprisal for her activism, Wei has been administratively detained several times, and she was sent to 15 months of Re-education Through Labor on the eve of the Shanghai World Expo in 2010.