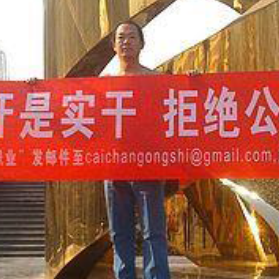 Ma Xinli, born in 1966, is a former bus driver who has petitioned to protect intellectual property rights for his inventions, and called for reforming China’s Patent Law. Detained previously for such activities, he was seized along with other activists in mid-March 2013, when they attempted to submit an open petition with over seven thousand signatures demanding anti-corruption measures. A day after he was taken into custody, police searched his home and confiscated his computer without a warrant. Though subsequently released, he and others continued to publicly call on officials to disclose their assets until police eventually detained them again in late March. Police initially held him on charges of “unlawful assembly,” but they later changed the crime to “gathering a crowd to disrupt order of a public place.” Ma Xinli was released on bail in February 2014.