March 10, 2014       Comments Off on Activist Cao Shunli in Critical Condition, Hospitalized in Beijing 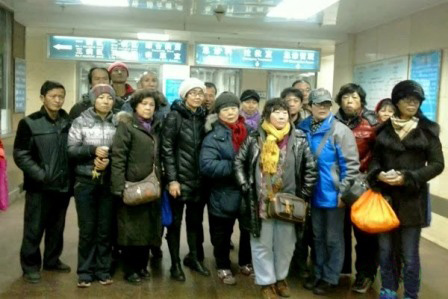 Activists gather at the Beijing hospital where rights defender Cao Shunli was hospitalized in critical condition on Feb. 16. The rights defenders in the photo were not allowed to see Cao. She had been denied medical treatment while in detention, and was in a coma by the time authorities took her to an emergency facility. (Sound of Hope)

Critically ill rights advocate Cao Shunli, who was prevented from attending a United Nations human rights review of China last fall, was taken to intensive care on Feb. 16 after being denied medical treatment for months while in detention.

“Cao Shunli is unconscious and on a ventilator,” her lawyer Wang Yuexplained to Radio Free Asia (RFA).

“She can’t talk and her condition is extremely serious… We think her life is in danger, but the hospital won’t give us any details; they just mumble something when we ask them,” he continued.

A nurse blocked the entrance to the intensive care unit and told Beijing rights defender Wang Ling that Cao was “deeply unconscious” and would not recognize him, according to Human Rights in China (HRIC).

Authorities did not notify her lawyer that she was taken to the hospital, nor would they disclose her condition to him or negotiate with him and her family about her treatment. Though Cao was initially taken to Beijing’s Qinghe Emergency Center, she was then transferred to an Army hospital, though her family requested that she be taken to an acute care hospital.

A heavy police presence at the hospital prevented several activists from entering the hospital, and about 20 of them were taken to police substations for questioning, rights defender Wang Ling told HRIC.

Her brother has been allowed to see her, reported China Human Rights Defenders (CHRD), which said that throughout her detention, the family’s requests for medical release have been repeatedly denied, and her condition has deteriorated since she has been detained. Cao has developed tuberculosis and a severe liver condition among other serious problems, but repeatedly has been denied medical treatment, CHRD says.

Cao and fellow rights defender Chen Jianfang were detained on Sept. 13, 2013 at Beijing’s International airport as they were leaving to fly to Geneva to take part in activities associated with the United Nations Human Rights Council (HRC) review of China’s human rights record.

On the eve of the HRC review, Oct. 21, she was formally arrested and charged with “creating a disturbance,” and has been detained since then.

In 2012, Cao was also detained with other activists for requesting public disclosure of China’s “National Human Rights Action Plan” for the UN review, and for requesting that citizens assist in drafting the plan.

Instead of allowing the participation of civil society in the process, the government has responded with retaliations against the activists, said CHRD .