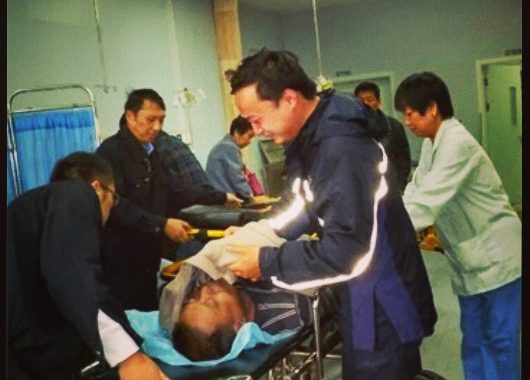 Detained activist Cao Shunli (曹顺利) has suffered from deteriorating health due to lack of medical attention, according to her lawyer, who met with Cao on October 30 for the first time since Cao was abducted in mid-September. Lawyer Wang Yu (王宇) went to Chaoyang District Detention Center several times before she was finally allowed an hour-long visit with Cao. The 52-year-old Beijing-based activist looks very thin and needs urgent treatment for a severe liver disease that has caused ascites. The lawyer submitted a bail request on October 31 for Cao to be released on medical grounds, but to no avail.

The lawyer confirmed that Cao was arrested and charged with “creating a disturbance” on October 21, the eve of the UN Human Rights Council (HRC) review of China’s human rights record. Cao had been initially detained on suspicion of “unlawful assembly.” The activist was taken into custody on September 14 at Beijing Capital International Airport as she was set to fly to Geneva to take part in training activities on UN human rights mechanisms. For several years, Cao and other activists demanded the Chinese government to include contributions from civil society in its preparation for HRC’s Universal Periodic Review. The government has responded with retaliations against them instead.[1]

Activist Sun Desheng (孙德胜) remains incommunicado since being seized on August 13 in the ongoing crackdown on freedom of assembly, association, and expression.  Authorities have repeatedly rejected his lawyer’s requests for visit. The 32-year-old activist was arrested on October 16 and charged with “gathering a crowd to disrupt order of a public place.” He is detained at Tianhe District Detention Center in Guangzhou. On October 30, national security guards also rejected Sun’s family member’s request to contact him. Sun has faced frequent retaliation for his activism. The activist had called for the release of the prominent legal advocate Xu Zhiyong (许志永), who spearheaded “New Citizens Movement,” which might be the trigger for his own arrest.[2]

An intermediate court in Sichuan Province has upheld a verdict issued in March to dissident and poet Li Bifeng (李必丰) on a concocted charge of “contract fraud,” but reduced his original 12-year sentence to 10 years. Li was detained in September 2011, but his trial took place more than a year later, in November 2012. According to Li’s wife, she has not been allowed to visit him since this past June. The 49-year-old Li is now serving his third prison term in retaliation for his activism; he was imprisoned a total of 12 years between 1990 and 2005. At the trial of first-instance, Li was also fined 300,000 yuan and requested to return 3 million yuan (nearly $500,000) that he supposedly embezzled from a company. Li Bifeng is currently incarcerated at Mianyang Chuanbei Prison in Sichuan.[3]

Shen Yong (沈勇), who had been fighting forced eviction, died in police custody one hour after being taken away from his temporary shelter on October 24. Family members saw bruises all over his body when they rushed to the hospital where he was found deceased. According to his family, Shen had been in good health. Reportedly, dozens of police officers and local government personnel barged into Shen’s temporary shelter, handcuffed Shen, and dragged off both him and his 78-year-old mother. Shen’s home was demolished in 2008, and his family has not received any compensation. They became homeless for several years and only recently set up a shelter on the land where their home once stood.[4] 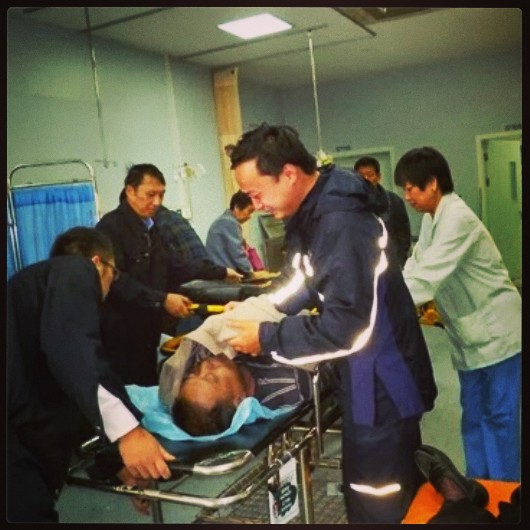 Shen Yong, a victim of forced demolition in Shanghai, died soon after local authorities took him away, with his body reportedly showing signs of trauma.

On October 17, CHRD sent a communiqué to the UN Working Group on Arbitrary Detention concerning the activist Gu Yimin (顾义民) of Jiangsu Province. Gu was arrested in June for “inciting subversion of state power” in the continuing crackdown on freedom of assembly, association, and expression. In May 2013, Gu posted photos online from the 1989 massacre around Tiananmen Square and applied to hold a public commemoration for victims. On June 1, police raided Gu’s home, confiscated his computer, and took him away, criminally detaining him the next day. Gu was put on trial on September 29, when many individuals were prevented from attending the proceedings. The court has yet to issue a verdict.