June 16, 2014       Comments Off on Human rights group releases list of over 100 people detained during Tiananmen anniversary

A human rights group has released a list of over 100 activists, journalists, lawyers, dissidents and other assorted individuals who are thought to have been detained by the government in the wake of the 25th anniversary of the 1989 Tiananmen Square protests.

The frequently updated list, documented by China Human Rights Defenders, (CHRD) a coalition of non-governmental organisations, focuses on persons who were either arrested, detained or questioned by authorities during a period beginning at the end of April. 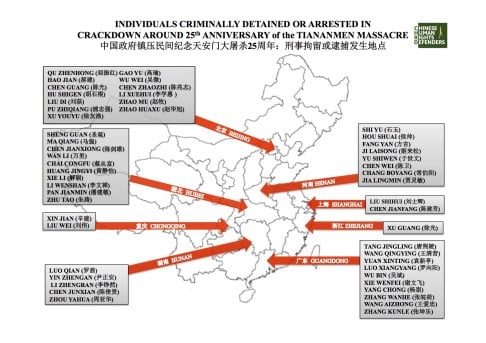 A map of all individuals detained in the wake of the Tiananmen anniversary. Some of these persons have already been released. Photo: CHRD

As of June 11, 116 individuals from various parts of China, including Beijing, Shanghai, Sichuan, Xinjiang and Guangdong are all listed, with an estimated 49 criminal detentions and two confirmed arrests.

Other affected persons currently have varied statuses, with some under house arrest and others already released.

Many who were not detained were invited by local authorities to “drink tea” – a veiled phrase for questioning – and were warned to avoid participating in any anniversary activities.

Chief among the detainees is veteran human rights lawyer Pu Zhiqiang, who was placed in criminal detention on May 6 under charges of “picking quarrels and provoking trouble” after he attended a May 3 Tiananmen commemoration meeting.

According to CHRD’s list, Pu is currently held at a detention centre in Beijing and “has told his attorneys that he is not receiving proper treatment for illnesses, particularly diabetes, for which he needs daily medication.” His request for release on medical grounds was reportedly denied.

“Pu was … a student lawyer in the 1989 protests, [and he] became a prominent human rights lawyer and advocate, taking up some of the most politically sensitive rights-defending cases,” said David Zhao, researcher and representative for CHRD. “He [has made] earlier remarks that he is still ‘deeply emotionally tied to [Tiananmen]’ and has ‘no regrets over his involvements’.”

“[These statements] may have led the authorities to fear that he would become an icon for those who seek justice… He is currently facing charges that may eventually lead to lengthy prison terms.”

Yu Shiwen (left) and Chen Wei (right). Photo: Screenshot via RFAOther persons on CHRD’s list include Wang Xiuying, an 83-year-old activist who had her home searched by Beijing police after signing a Tiananmen commemoration petition, Chen Wei and Yu Shiwen, an activist couple who organised Tiananmen memorial services, and Wu Wei, a former South China Morning Postjournalist in Beijing who interviewed Pu Zhiqiang in the past.

All of Wang’s Tiananmen-related materials were reportedly confiscated, and Chen and Yu both remain in custody. Wu was released on June 7.

Chinese authorities have long monitored activists and journalists during the anniversary of the Tiananmen protests, but this year’s suppression was particularly harsh, according to Zhao.

“The clampdown on commemorative events this year is the most severe of all years and this reflects the [government’s] determination to wipe out the memory of Tiananmen,” Zhao said.

The detention of Tiananmen activists has attracted the attention of the United Nations, and UN human rights chief Navi Pillay has called on China to release detainees as soon as possible.

“Rather than stifle attempts to commemorate the 1989 events, the authorities should encourage and facilitate dialogue and discussion as a means of overcoming the legacy of the past,” Pillay said in a June 3 statement.