October 20, 2014       Comments Off on Gallery and Video on Secret Detention & Abuse of Women in China’s Black Jails 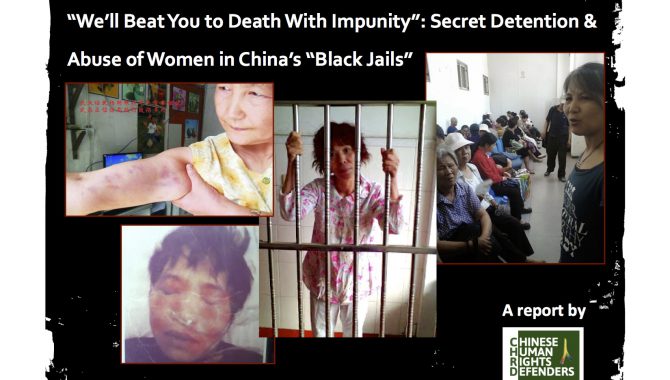 CHRD has produced this gallery of images, cases, and data to accompany the report “We’ll Beat You to Death With Impunity”: Secret Detention & Abuse of Women in China’s “Black Jails.” The report examines abuses in black jails across China in these facilities, and particularly against women, who make up roughly 80% of the black jail population. The gallery details some types of abuse that occur in black jails, the impunity officials enjoy, and the reprisals against black jail victims who seek justice.

The following video (Chinese only) was filmed inside a black jail at the Dongjiao Business Hotel in Wuxi City, Jiangsu Province. A group of activists—including Ms. Ding Hongfen (丁红芬) and four men, Qu Fengsheng (瞿 峰盛), Shen Aibin (沈 爱斌), Shen Guodong (沈果东), and Yin Xijin (殷锡金) – broke into the locked holding cell to rescue individuals who were detained inside, documenting the daring incident. Authorities later retaliated against the five activists; they were indicted on suspicion of “intentional damage to property” and are set to go to trial within days of the release of CHRD’s report (read more on this case in previous reporting by CHRD).